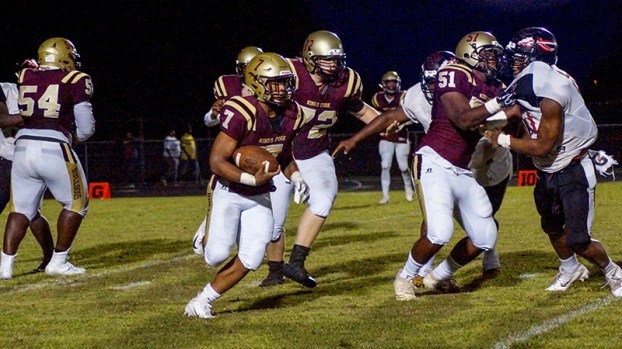 The Bulldogs will be on the road Friday night trying to upset Lake Taylor High School. (Caroline LaMagna Photo)

Bulldogs, Warriors on the road in semifinals

The Warriors will get a rematch against Indian River High School this week, while the Bulldogs will see the Titans in the regional semifinals.

The Warriors will have arguably the toughest matchup of all playoff teams in Hampton Roads. Nansemond River will go back on the road for a rematch against Indian River. The Warriors are coming off of a 39-0 win in the first round over Kecoughtan High School. The teams met back in September, with Indian River taking the game 42-6.

Since that game, the Warriors have been hoping for a chance at a rematch with the Braves. Despite the weather, Nansemond River has been having good practices, and the Warriors are more than motivated to step on the field Friday night.

“We are excited about the opportunity to kind of get some redemption,” Coach Justin Conyers said. “At the end of the day, we have to be the better team for 48 minutes, and that’s what we plan on doing.”

Last season, the Warriors defeated Indian River on the road to advance to the regional championship game. Even though many probably consider Indian River the favorites for the region, Conyers has been keeping the conversation simple with his team.

“We are the regional champs until somebody beats us,” he said. “We don’t need anything extra outside of what we normally do to win this game. We know we belong here, and we just have to go out and be the best we can be.”

Conyers likes where the defense is right now and believes the offense has been clicking as a result of it. Nansemond River has won their last five games and six of their last seven. They couldn’t be going into Friday night’s matchup in better position than they are right now.

Nansemond River will be at Indian River at 7 p.m. Friday.

The Bulldogs are back in the Class 4A region semifinal for the second year in a row. This time, they will be facing Lake Taylor, which will present a tough challenge for the Bulldogs on the road. Last week, King’s Fork went on the road and took down Deep Creek High School.

“They are a really good team, and they are athletic,” Coach Scottie Littles said. “They are talented, athletic and they are strong. Like we have been telling the kids every day, it’s a blessing to be still playing, and what we do on that field is going to determine whether we continue.”

Discipline will be big for the Bulldogs Friday night. Against a team like Lake Taylor on the road, the Bulldogs will have to limit turnovers and take advantage of all opportunities.

“It’s going to be a tall order, but we know what we need to do to go out there and play well,” Littles said. “We have to understand there aren’t any second chances. Losing to Lafayette last year after the season we had put things in perspective for the seniors. Like, ‘Hey, this could be over any minute.’”

Marc Dyer did a good job managing the game from the quarterback position. He made plays to Bulldog playmakers that set up touchdowns or field goals. With the win last week, King’s Fork ended a four-game losing streak. They could be catching the right momentum at the right time.

“I think with this week of practice we have had, we are focused and excited to play,” Dyer said.

King’s Fork will be at Lake Taylor at 7 p.m. Friday.

BC Warriors to play in regional championship