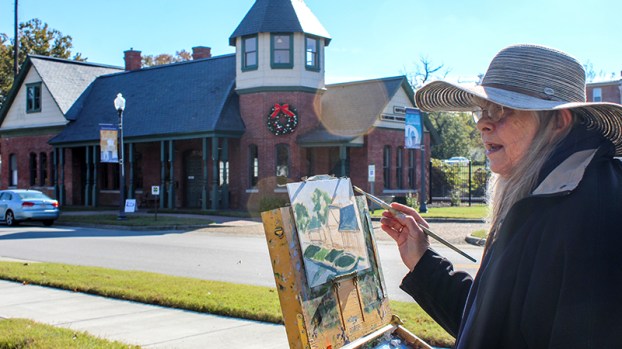 Norma “Squeaky” Swan came to Suffolk from Norfolk to participate in the Suffolk Center for Cultural Arts’ Plein Air event on Saturday. She spent her day at the Seaboard Station Railroad Museum to paint.

Painters from all over Hampton Roads braved the cold weather on Saturday to compete in a plein air painting event for the Suffolk Center for Cultural Arts.

Plein air is a style of painting that is done outdoors, and the artists paint the scenes they see in front of them.

“We had 10 people participate. It was smaller than the last one in the spring,” said Jester’s Assistant Manager Pat Eelman. “We had a lot of new folks come, and everyone had a good time. Some of their families came in the evening for the critique.”

The Suffolk Center had another plein air event in the spring of this year, and it featured 16 painters.

Sandy Waters and Barbara Harris are Suffolk artists, and they requested that the Suffolk Center do a plein air event, and the center was happy to oblige.

Eelman said the 10 artists who participated went all across the city, and they saw a variety of different paintings when it was time for the critique in the evening.

The artists had just under eight hours to complete their pieces, and some were ambitious enough to paint two pieces.

“You really challenge yourself to paint in the elements and paint what you see in front of you,” Eelman said. “It’s also a challenge to get something done in a timely manner.”

The event drew new plein air painters as well as painters who are practically experts at the craft, but Eelman believes everyone had a successful afternoon in the city.

“There was definitely a variety of talent and experience,” Eelman said. “Some people had never done plein air before, and there were others that you could see that had a lot more experience. It was pretty impressive to see how much some people got done.”

Everyone had the chance to vote for the paintings they loved the best at the end of the event. Nick Grockhowski, Elizabeth Blanchard and Karen Salaz won first, second and third, respectively.

This won’t be the last time the Suffolk Center has a plein air event like this.

“We have been asked to do another one, and people are really interested. It’s open for discussion,” Eelman said.

Smiles and laughs, despite diabetes

Wednesday was World Diabetes Day, a celebration created by the International Diabetes Federation and World Health Organization in 1991 to... read more