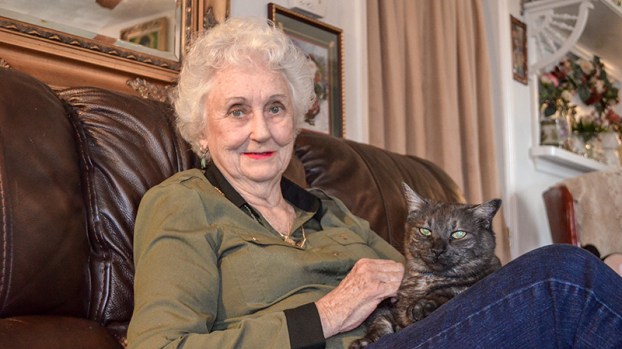 The late Phyllis Rae Murphy, former owner of Harmony House Antiques, sits in her shop in April with her beloved cat Isabella.

Friends, family and the Driver community are mourning the loss of a shop owner and animal lover who was generous, caring, brave and strong to the very end.

Phyllis Rae Murphy, 85, passed away on Nov. 8 after a long battle with cancer. The owner of Harmony House Antiques died in her home surrounded by loved ones.

“She was as brave as anyone could be, and she fought all the way,” her daughter, Vickie Lee Murphy, wrote in an email.

Phyllis was born to Vernon Paul Butler and Bessie Cleora Butler on Aug. 17, 1933, in Portsmouth. She often spoke about her father, who worked in the shipyard, was known to everyone as “Papa” and was also an animal lover.

She was beloved by many, including her precious cat, Isabella. “Mama loved all cats, but she felt a special bond with Isabella,” wrote Vickie.

An “unusual” cat, Isabella would watch animal shows and Western dramas on the television with Phyllis.

“The cat really loves watching television. She even had her own television in the back room, and she would watch it when Mama was busy with customers,” Vickie wrote.

Phyllis love for animals led her to become one of the Suffolk Humane Society’s original members, and the society’s monthly meetings were held upstairs at the Harmony House in its first year.

According to Vickie, the Virginia Beach Neuter Scooter was also at the Harmony House for about two years, until the society found a permanent location.

“You would see the ladies holding the small dogs after surgery to give them comfort until the owners arrived to pick them up,” she wrote.

It wasn’t always sunshine and rainbows at Harmony House. On April 28, 2008, a tornado ripped through Driver and tore apart the antiques store. Its walls and ceiling were gone, and exposed rooms were filled with debris.

Phyllis had survived the ordeal from inside the still-intact bathroom, along with others. Nine foster cats that were inside the store also survived, and Isabella was found three days after.

It took 53 weeks of setbacks and struggle, but crews eventually rebuilt Harmony House, and it continued to serve as a meeting place for friends and newcomers alike.

Phyllis ran Harmony House full-time after retiring from Portsmouth Parks and Recreation with more than 20 years under her belt. She spoke of her time in the department fondly, but she retired to devote more time to Harmony House and to take care of her mother, whose health was declining, according to Vickie.

“Mama loved her job at Parks and Recreation. She was known for her efficiency and her professional manner in dealing with the public,” she wrote.

She brought that tenacity to Harmony House every day, and many of her friends became regulars at the store, according to Vickie. She would often have five or six come at a time, along with customers that would sit with her in the back of the store.

Sometimes customers would share their problems, and Phyllis was never one to turn away somebody in need.

“She never turned anyone in need away,” Vickie wrote. “Often, she would feed someone who was hungry, or provide them with gas money or help pay an electric bill. Whatever was needed. She was a person who loved everyone.”

She also loved giving Christmas gifts, and one of Vickie’s favorite memories is how her mother would stockpile extra gifts during the holidays, just in case an unexpected visitor arrived.

“Mama was very generous,” Vickie wrote. “If someone admired a piece of jewelry she was wearing, she would take it off and give it to them.”

Driver was another one of her great loves, whether it was the Driver Days festival in the fall, or when Santa Claus would come into the Harmony House to visit with the children.

She herself was a gift to the Driver community, and her loss will be felt deeply.

“She was a super woman, and she’s going to be missed by many,” said Terri Johnson with Driver Events.

She was predeceased by her husband, Ocie Sydney Murphy, and her sister, Peggy Marie Morris.

She is survived by her children, Vernon Sydney Murphy, Vickie Lee Murphy and Michael David Murphy (Linda), along with six grandchildren, six great-grandchildren, her beloved Isabella and many friends.

The family is being assisted by R.W. Baker & Co. Funeral Home and Crematory. Condolences may be offered at RWBakerFH.com.

In lieu of flowers, donations may be sent to the Suffolk Humane Society at 412 Kings Fork Road, or online at suffolkhumanesociety.com.

Painters from all over Hampton Roads braved the cold weather on Saturday to compete in a plein air painting event... read more