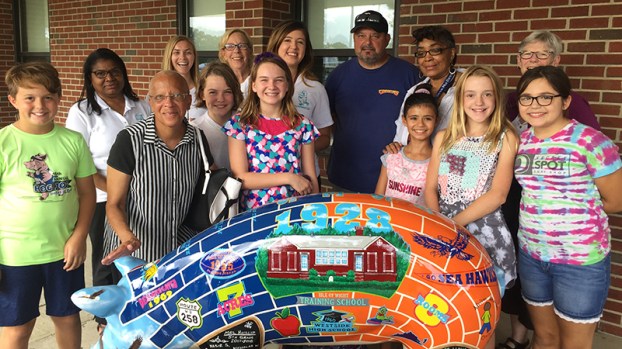 Fifth-grade students at Westside Elementary School asked the question “Who’s the smartest pig in town?” during their 2017-2018 school year.

The class tackled a project to learn about the history of their school. In addition to their online research, students visited the Schoolhouse Museum in Smithfield and also spoke to local experts and historians. Those included Carol Pretlow, Dianne Delk, Kathy Mountjoy, Martha Jackson, who recently retired from Westside, and Toni Brown, an assistant principal at Westside. Students interviewed these people to find out more about the school. They discovered the school colors used to be orange and blue and the mascot was a Seahawk. Today, they are the Westside Eagles with school colors of burgundy and teal.

Pretlow’s grandfather, Kenneth Pretlow, donated land to the county for the school, which was originally called the Training School. It was the first school for black students in Isle of Wight County when it opened in 1928. Students learned that Westside has experienced many changes in 90 years. What was once a small, segregated school now houses a diverse population of almost 800 students.

Students wanted to share the history of Westside through a statue and were inspired by the pig statues found throughout Smithfield. The class headed into town for a field trip led by local historian Kathy Mountjoy. The students explored the pig statues to see how they were used to commemorate events and locations in the town’s history.

After returning to Westside, students designed their own smaller versions of the pigs and included facts they learned from their research. They wrote persuasive papers outlining why their design should be selected for the full size statue that would be installed at the school. In the end, highlights from each design were used to develop the final version, which represented the past and present of Westside Elementary.

The students saw the finished product when it was unveiled as part of a ceremony on Oct. 9. Special guests in attendance included the experts who assisted with the students’ research — Pretlow, Jackson, Brown and Mountjoy. Also present was Greg Rudy, who created the final design and delivered the completed statue to the school.

Orange and blue bricks decorate one side of the pig, along with a Seahawk, and facts about the early school — seven acres, eight rooms, desegregated 1969. The reverse side has teal and burgundy bricks, along with the eagle mascot, and images associated with the current school. Each leg contains the names of the teachers and students who participated in the project, forever making them part of the history of Westside.

Wolves on parade at Carrollton Elementary

Wednesday morning at Carrollton Elementary School was a festive showing of hundreds of costumed children and a Halloween soundtrack of... read more