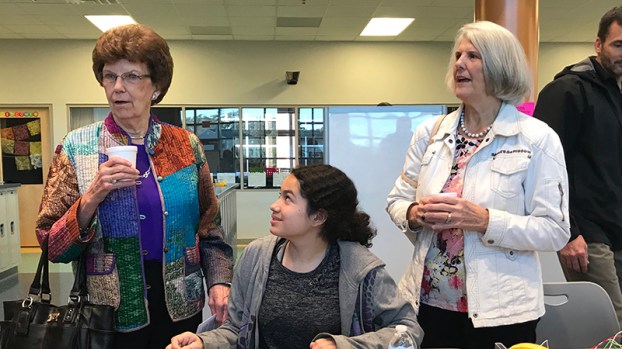 State of the Schools discussed

Superintendent Dr. Deran Whitney praised the strides Suffolk Public Schools has made with accreditation, the College and Career Academy at Pruden, school volunteers and more during his annual State of the Schools address Friday.

“I want to share with you where we have been, where we are and where we are headed as a school division,” Whitney said.

The breakfast event was held at Col. Fred Cherry Middle School with dozens of school division leaders, teachers, city officials and other local stakeholders in attendance.

All but two of Suffolk’s schools are fully accredited, with Booker T. Washington and Mack Benn Jr. elementary schools being accredited with conditions.

“We are very proud of each of these schools: the teachers, staff, parents, but most importantly our students,” Whitney said. “We commend each of our elementary school’s teachers and staff for the continuous improvement we clearly see taking place.”

Along with the accreditation, Whitney laid out specific academic improvements each of the schools have seen in math, reading and science.

Elementary schools in Suffolk saw an increase in achievement in all three topics, and middle and high schools saw improvements in science.

The graduation rate is a factor of accreditation, and it is measured by the Graduation Completion Index. Both Nansemond River and King’s Fork high schools saw their graduation index drop by one and two points, respectively. Lakeland High School’s index increased by one point.

All three schools have maintained the school division’s objective of 85 points.

Whitney told the crowd the College and Career Academy at Pruden has seen improvements in the last year with its co-op program.

The co-op program did significantly better than it had in past years. A total of 37 students earned $134,870 from their co-op experiences working with local businesses. This was an increase of approximately $41,000.

“Clearly with the College and Career Academy at Pruden program adjustments and what we offer at our secondary schools, these numbers should continue to increase,” Whitney said.

Part of the school’s efforts for improvement have included ramping up communication and parent involvement. The school division has seen success due to a higher number of registered volunteers.

“We have done a number of things such as improving and updating our website to improve student-to-parent and division-to-parent communication,” Whitney said. “We continue to encourage parent opportunities such as school advisory committees, school-level parent surveys and parents’ roundtables.”

All invited to Thanksgiving feast

A local Mexican restaurant and a nearby church and food pantry will partner this Sunday to invite folks for a... read more