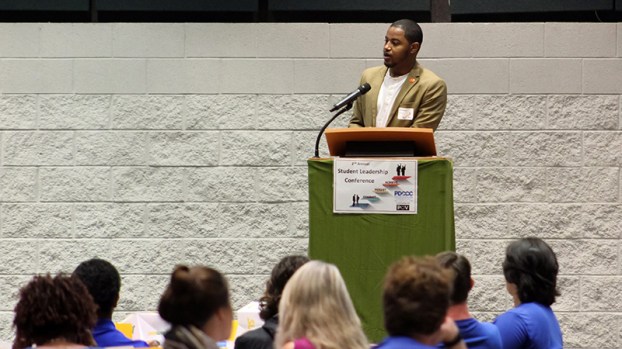 Krishaun Branch delivers a motivational message during the special event that was focused on student success. (Jamie Dodd Photo)

The PDCCC Students Transitioning through Education Programs Successfully team, along with co-leaders and members of the committee who planned the event, focused on the theme “Commit. Persist. Achieve.”

“Even with all the schools in the region being impacted by the hurricane, we still had approximately 150 attendees,” said College Success Coach Dr. Sandra Walker. “None of the high schools who registered were able to participate, with the exception of a few students who drove themselves to the conference. Southside Community College usually brings at least 10 participants, but they were also not able to travel. We were pleased that some of the staff from Virginia Community College System were able to attend.”

The conference featured a PBS Point-of-View documentary titled “All the Difference,” which reveals the struggles and challenges of the African-American youth while following the path of Robert Henderson III and Krishaun Branch, two teenagers from the South Side of Chicago whose dream is to graduate from college. They rose above the statistical odds that were against them, and found that the support from those around them was key to fulfilling their aspirations.

Both graduates of Urban Prep Academies, an all-male black high school nationally recognized for successfully preparing all of its graduates for four-year educational institutions, the two young men took time out of their schedules to visit Franklin in order to engage with the participants through a question-and-answer and meet-and-greet sessions.

Henderson grew up with his six siblings in his grandmother’s home after his father killed his mother when he was 17 months old. Initially testing below his grade level in reading and math, he went on to graduate from Urban Prep Academies with honors. He also graduated college as a pre-med student with a double major in history and American studies, and a minor in Asian studies. He now teaches and is a member of the Alpha Phi Omega National Service Fraternity.

Branch had to fight to stay alive in his crime-ridden neighborhood that was dominated by gang activity. Wanting something better for himself and his family, he found that the only way to achieve greater things is to work hard and persevere, despite the stresses of finances and self-doubt. After graduating from Urban Prep, he earned a Bachelor of Science degree in psychology from Fisk University. Branch was hired by Urban Prep right after graduation and is now serving as dean of students for its Charter Academies for Young Men-West Campus.

“We were pleased to offer several special pre-screenings of the film to our faculty and staff,” said College Success Coach Laura Clark. “We also encouraged related curriculum activities in order to allow students to demonstrate what they have gleaned from the conference.”

The Student Leadership Conference was designed to also provide the opportunity for civic engagement and service learning, which according to Walker, is “an essential intervention/strategy employed by STEPS in order to garner more positive student outcomes.” The students, as well as faculty and staff have participated in the annual Genieve Shelter Toiletries Collection Drive, which has resulted in more than 1,500 items donated in the last three years.

STEPS team members are also part of the PDCCC Food Bank Committee which addresses food insecurities among the students. Conference participants were asked to bring an inexpensive toiletry item or a non-perishable food item as a “fee” for registration, which will not only help with both drives currently under way but also build empathy for others and soft skills that can be attributed to student development and success.

The STEPS program provides academic and non-academic resources to participants in order to increase the number of graduates earning a degree or credential or who choose to transfer to another college or university. Students who are selected to participate in the program are typically first-generation college students or those demographically underrepresented.

“We are finding that many of our students struggle financially and experience food insecurity. Not all students have the resources to provide regular, healthy meals for themselves or their families,” said Dr. Tara Atkins-Brady. “We increase academic success by taking a holistic approach in assisting our students through programs like STEPS and connecting students with community resources.”

Painters from all over Hampton Roads braved the cold weather on Saturday to compete in a plein air painting event... read more