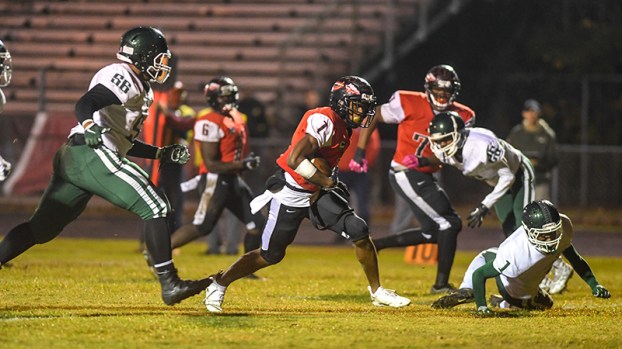 Kevin Johnson was voted Suffolk News-Herald Player of the Week after scoring three touchdowns and grabbing an interception in a first-round playoff win for the Warriors. (Sarah Murphy Photo)

Johnson gives his all in last season

Kevin Johnson was voted Suffolk News-Herald Player of the Week after scoring three touchdowns and grabbing an interception in a first-round playoff win for the Warriors.

Nansemond River High School football had a great season this year after making it to the state semifinal game last year. Johnson, a senior, was part of that journey last year as an all-district and all-state player.

But for all of the accolades he received last year, Johnson didn’t have his best game ever as a Warrior until last week. Against Kecoughtan High School, Johnson scored three touchdowns, with two being rushing touchdowns and one being a fumble return. Two of his touchdowns went for 50-plus yards.

“That was probably my best game at NR,” Johnson said. “I am happy I was able to do that during my senior year. That game means a lot to me.”

Johnson knew he had the ability to do what he did; that game was just another reminder. After his second touchdown, Johnson looked into a camera on the sideline and yelled, “I’m not done!”

It was one of those games where everything went right. He feels good about how his senior year has gone in general with his team.

“It’s been great,” Johnson said of his senior year. “I feel like I have connected with my teammates and coaches on another level.”

All that mattered for Johnson this season was what he could do to make the team successful. He wanted to be able to help the team get past where it was last season.

“I just wanted to go out with a bang my senior year,” he said. “I wanted to help my team make it back to where we left off last year. Everything I do is for my brothers and for this program.”

Johnson’s family is important to him and is a reason behind the inspiration he has today. They drive him to be the best he can be every day.

Beyond his senior season, Johnson hopes for an opportunity to continue to keep playing. He is sorting through things right now and said playing in college is a goal.

Johnson looks to be putting together a senior campaign that was even better than his junior campaign, which could possibly lead to him being on someone’s college field next fall.

Warriors fall in rematch with Braves