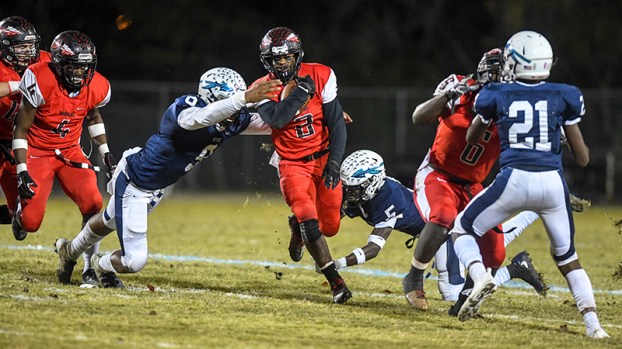 Quijoun Gordon scored the only touchdown for the Warriors in their 20-8 loss to Indian River High School. Nansemond River High School finished the season with an 8-4 record. (Sarah Murphy Photo)

Warriors fall in rematch with Braves

The Warriors’ season ended Friday in the Class 5A regional semifinals with a 20-8 road loss.

Nansemond River got off to a fast start and scored their only points of the game in the first quarter. A 60-plus yard touchdown run from Quijoun Gordon put the Warriors up 6-0 and, with a two-point conversion, 8-0.

But Indian River didn’t waste time getting on the board with a run early in the second quarter. The Braves eventually ran off with 20 unanswered points to go into halftime with a 20-8 lead.

Neither team scored in the second half.

If there was a silver lining to Friday’s game, it was that the Warriors were able to hold Indian River to its lowest point total of the season so far. In the second half, the Braves weren’t able to notch a first down. Penalties hurt the Warriors throughout the night, which they acknowledged they couldn’t have against a team like the Braves.

“I think we played way better than we did last game,” Coach Justin Conyers said. “We just didn’t execute when we needed to. Defensively, we played as well as we could. Offensively, we were driving, but we just couldn’t finish them off.”

“We did a lot of good things this year,” Conyers said. “These kids fought hard and played hard and did what they were supposed to do. I couldn’t have asked for a better group.”