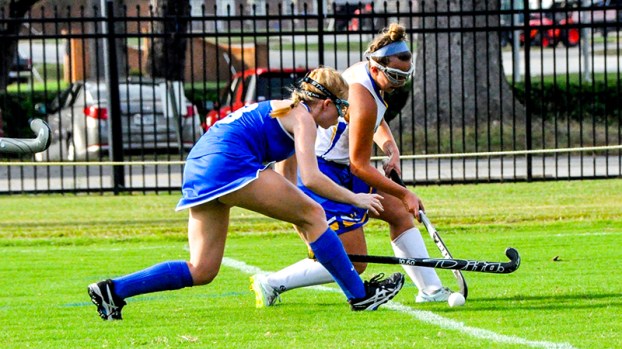 NSA field hockey had an up-and-down season, but one thing that remained consistent during the season was the play of Abby Carlson.

The Lady Saints were able to make a push late in the season to secure a state tournament appearance. Carlson has been rewarded for taking her game to another level this season.

Carlson was also selected first team All-Conference and was the only Lady Saint to make the All-State team.

“I was so excited to make a conference and state team,” she said. “It was validating to see all of my hard work pay off this year. I also knew none of it would have been possible without my teammates, because everyone relies on each other to play a successful game.

Carlson’s teammates were also proud of her play and have said that she was more than deserving of what she was able to achieve this season.

“She really stepped up this season, and completely deserved first team recognition,” senior Lauren Meyers said. “She is a key part of our team’s success.”

The senior had many goals this season, and none were ever to make all-state or all-conference. She simply wanted to make sure she was getting better every game. Her motivation was to be a reliable player for her team.

“I wanted to be someone my team could depend on, whether we won or not,” Carlson said. “I didn’t focus on getting the recognition. It was all about what I could do on a game-to-game basis for my team and me.”

Carlson saw a huge jump in her skills this season. She described it as everything “clicking” and just falling into place. Even though she was the only one to receive the all-state recognition, she made it clear there was no one-person band on the team this season.

“Everybody played a role in our success, because that’s just the type of team,” Carlson said. “We had a good season, and every one of us left it all out on the field.”

Nansemond River High School senior Kori Carter has decided on where she is going to run track in college. Thursday... read more