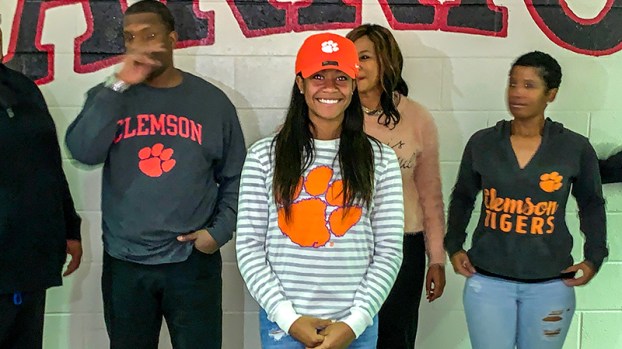 Team WAR standout Kori Carter will be heading to Clemson University for track and field. Carter is one of the top senior runners in the country. (submitted photo)

Nansemond River High School senior Kori Carter has decided on where she is going to run track in college. Thursday evening, Carter revealed Clemson would be her future home in a signing ceremony at Nansemond River.

Last week, Carter released a list of finalist schools that featured Cornell, Clemson, South Carolina, Texas and North Carolina. The Team WAR standout had no shortage of NCAA Division I schools seeking her out.

“The process was stressful, because there are so many good teams,” Carter said. “Clemson just felt right. I could see myself at that school if I didn’t have track.”

Carter mentioned that she had decided on Clemson about two weeks before revealing it to the rest of the country on Thursday. She sought advice and little tidbits from her former teammates who also run in college. Carter also discussed the situation with her family, but everyone ultimately left it up to her to make the best decision.

“My parents definitely kept me sane throughout the whole process,” she said. “They were pretty supportive through it all.”

The Team WAR senior mentioned it wasn’t easy turning down Cornell, especially since she has a relationship with Nansemond River’s former coach, Justin Byron, who coaches there now.

However, her connection with the Clemson coaches was effortless, and that was another reason she chose Clemson. She plans to major in health sciences there.

“The coaches are great, and I really enjoyed the team,” she said.

Carter had been among the most highly regarded runners in the country. Milesplit USA ranked her 18th in the class of 2019 for girls. She excels in sprint and hurdles. Up to this point of her high school career, she is a six-time national champion, 17-time All-American, seven-time individual state champion and a three-time relay state champion. She holds some of state’s and nation’s fastest times.

With her college decision behind her now, she can put all her focus into her senior seasons of indoor and outdoor track.