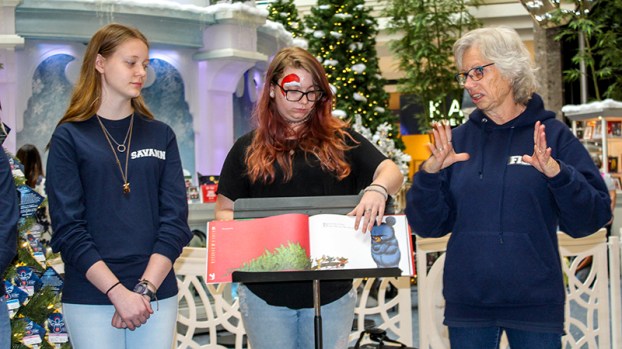 Listening to Christmas carols signals the beginning of the holiday season for most, but for the deaf and hard of hearing community, that isn’t the case.

But Lakeland High School’s “Talking Hands” American Sign Language club recently brought holiday cheer to a crowd of children from Hampton Roads that don’t have the chance to hear Christmas songs on the radio. They were a part of the Signing Santa event held at MacArthur Center mall on Nov. 13.

The Norfolk mall brought a Santa Claus and ballerina that are both proficient in ASL to take pictures and talk.

The group swayed and danced as their hands sang songs like “Rudolph the Red-Nosed Reindeer,” “Frosty the Snowman” and “Silent Night.”

“I always say this event is like a field trip where my kids get to provide a service to the children who don’t get to hear carols,” said Lakeland’s ASL teacher Anita Fisher. “It’s so special.”

The group has been practicing since September to get the songs perfect and make sure the children had the best experience possible.

“We started the last week of September, and we practiced two hours every Tuesday,” Fisher said. “The kids in this group are dedicated.”

The students love coming to the event every year, because they believe that what they are doing is important to the community.

“We take the music for granted, because we can turn on the radio and hear the carols,” Fisher said. “These kids can’t just walk into the mall and hear the music. They need this interaction, and that’s what makes it so special.”

Only one student was returning from previous years, and he was just as happy to return again and perform at the mall.

“I like just coming and seeing all the kids,” said Jacob Campbell, 18. “It’s very fulfilling giving back to the community.”

Performing gave some of the students a chance not only to give back but also to get back to what they already know.

“My little brother didn’t talk, and he did American Sign Language,” said Christina Butler, 15. “It’s really fun to get back into it.”

Not only did the “Talking Hands” perform songs and dances for the children, but after they took pictures with Santa Claus, they got to watch as the group and Fisher performed the new Christmas story “Santa Bruce” by Ryan T. Higgins.

Signing Santa was a full-day event to provide an inclusive and enjoyable day for the deaf and hard of hearing.

“It’s all about inclusion. Every child should have the opportunity to share their wishes with Santa,” said MacArthur Center marketing director Karen Husselbee. “It’s really special to do something like this for the deaf and hard of hearing.”

Families in need received turkeys and all the fixings at two charitable events on Saturday. LW’s Lawn Service and MWM... read more