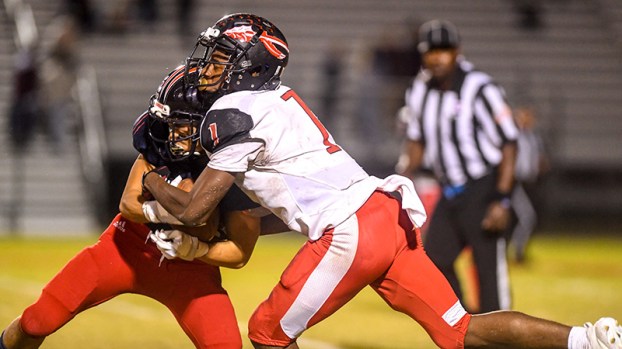 Kevin Johnson was selected a first team running back and a second team defensive back on the All-District teams. (Sarah Murphy Photo)

Suffolk had a strong representation on the Southeastern District All-District teams this season.

The football season recently wrapped up for all Suffolk teams, as Nansemond River High School and King’s Fork were the last two teams to finish their seasons. Each team had some high and low points but have a lot of talent spread out among the three Suffolk teams.

Nansemond River High School led the way with eight selections on the all-district teams. They had the best record of the three teams at 7-3. On the first team offense, three Warriors were featured. Kevin Johnson was selected a first team running back while Datron Branch and Rashaad Williams were selected at offensive line and kick returner, respectively. Keonte Cobb headlined the first team defense for the Warriors at defensive line, and JaQuelle Harrell was selected at linebacker.

King’s Fork High School came in second with seven selections on the all-district teams. They finished the regular season with a 5-5 record. Leo Wethington led the way as a first team running back with Bobby Boone being selected a first team wide receiver. Jay’ree Hardy was selected to the first team defense, along with Elijah Askew.

Two of the three Suffolk Public Schools advanced to the playoffs, with Nansemond River even having the opportunity to host a game.