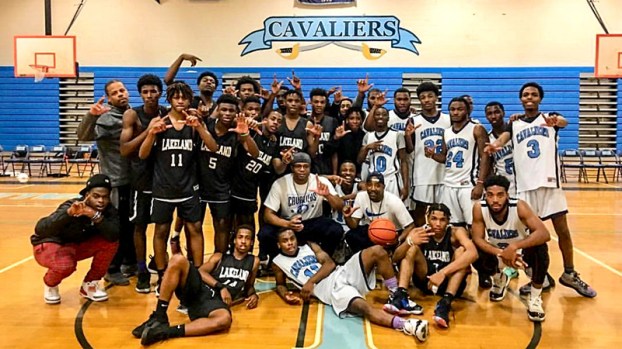 Lakeland High School’s boys’ basketball team hosted a Winter Madness event on Tuesday in preparation for the season starting next week. Current and former Lakeland alumni basketball players got to play against each other. (submitted photo)

The Lakeland High School Cavaliers are gearing up to start their season next week officially, and the season kicked off with a burst of momentum with Tuesday night’s Winter Madness event.

The event featured a preview of the team this season, as the Cavs boys’ basketball team faced a group of former alumni in a scrimmage.

Dozens of alumni including former cheerleaders, girls’ and boys’ basketball players came back for the event. The Cavs also collected donations, $300 of which was donated to the Suffolk News-Herald Cheer Fund.

“It was a great event and turnout,” Coach Clint Wright Sr. said. “It was a phenomenal event for the first time. We are already planning for 2019. I was truly excited about the alumni that were able to pour in for this event to get our season started.”

The Cavs will be returning a strong team this season. They will have more than 13 returners with varsity experience after having none last season. Lakeland was still able to win a regional playoff game last season before being eliminated. Since then, the Cavs have built chemistry and experience through spring, summer and fall basketball.

“Our goal was to get stronger and more confident simply,” Wright said. “I felt the number of games we played in the offseason helped us. I think one thing that is going to be different about this season is fear. There were times we played a bit on the edge or nervous, and we are hopeful this year will be different.”

Keimari Artis, Clint Wright Jr., Raymond Bellamy, Quentin Livingston and Jaren Reid form a solid group of returners. Artis is an All-District and All-Region player, with Wright being an All-Region player as well. Livingston has started to spark the interest of college coaches after already pulling in his first Division I offer over the summer. Lakeland also has solid depth and has the possibility of making a lot of noise in the district this season.

“From 1-13, I could bring a list of detail of what each player brings to the table,” Wright said. “It’s a good group that we can go deep into our bench. What we experienced last year, and this summer, should pay dividends.”

“I think we are going to be very good this season,” Artis said. “We all have varsity experience under our belts. Some of those close losses we had last year, we can turn into wins this year.”

Lakeland opens its season next weekend with back-to-back games. They will host Hickory High School on Nov. 30. On Dec. 1, they will travel to Richmond to face Thomas Jefferson High School.

Carlo Cecchini was selected to the boys’ volleyball Southeastern District second team. Cecchini was the only Suffolk athlete to make... read more