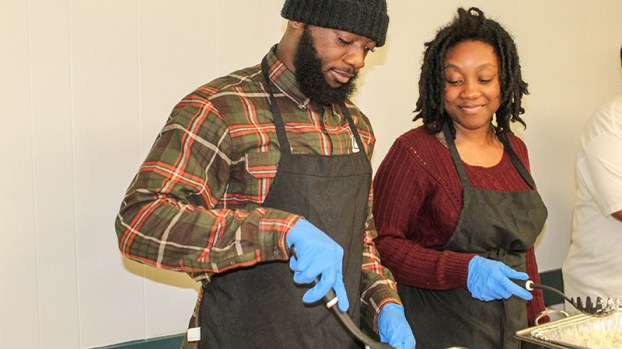 Arnesto Frost and Kiara Johnson help serve food at Union Hall for It’s Time for a Change Foundation’s first charity event. The foundation served a Thanksgiving meal to anyone in need on Tuesday afternoon.

Many people in Suffolk extended a charitable hand to their community in the week before Thanksgiving, and Saquan Branch was among them.

Branch decided to give back after years of seeing a need in his community. Branch recently started his It’s Time for a Change Foundation, and its first event was a Thanksgiving meal at Union Hall in downtown on Monday.

“I’ve been staying in downtown my whole life. I lived in the Southside then moved to Hollywood. I see those who were always in need of a meal,” Branch said.

Charitable giving was something he learned early on from his grandmother. She was always willing to give Branch money, even if it was her last dollar, and Branch has taken that principle to heart.

He was determined to help his community, even if it meant giving away his last dollar.

The event was open from noon to 5 p.m. and attendees received a free meal that included fried chicken, macaroni and cheese, string beans and sweet potato pie for dessert.

Branch was hoping to provide more for those coming, but he was happy to do what he could.

“Honestly, something is better than nothing,” Branch said.

To make the event move more smoothly, Branch enlisted the help of his friends, and he was able to have coworkers from Keurig Green Mountain help out. More than 20 attended the event to volunteer.

Branch was grateful that the company allowed him to take time from work to pass out fliers and hold the event in the community.

This Thanksgiving event is just the beginning for Branch and his foundation, and he believes he can make a real change in downtown Suffolk.

“I want to be able to make a change,” Branch said. “I want to grow from city to city.”

While people were enjoying their food, Branch also encouraged everyone attending to sign up to get their GED. He hopes that encouraging them to do so can help to improve their current situations.

“Hopefully they can get their GED and maybe get a better job,” Branch said.

The foundation hopes to have another event for Christmas, but Branch doesn’t have solid plans for that just yet.

Three tractor-trailers full of turkeys and all the trimmings pulled into the Rose and Womble Realty parking lot in Harbour... read more