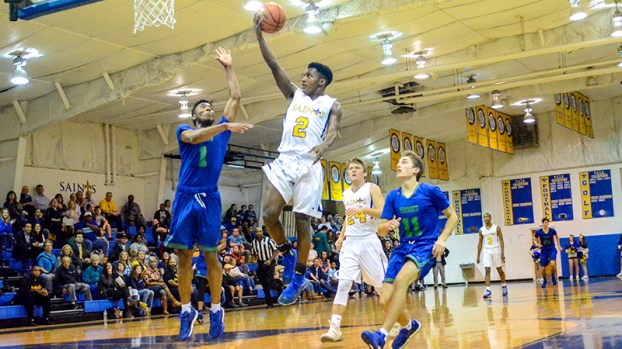 George Pettaway makes a play during a game last year. The Saints will get their season started Nov. 29 against Stonebridge School. (Joel Hawkins Photo)

For the third time in three seasons, the Nansemond-Suffolk Academy boys’ basketball team will have a new coach. Larry Ward, who coached NSA last year, will be at Norfolk Christian this season. Fuhrmann, who was previously at Hampton Roads Academy, will try to step in and add some stability to the Saints program at the coaching position. He was hired back in August and is excited to continue building with his new team.

“Myself and my coaching staff see a lot of potential in this group,” he said. “We still need some time to gel with football ending and stuff, but we have some great potential. I am definitely excited. They have been a fun group to coach so far.”

The only thing changing this year is the coach; many of these same players have been playing together for a couple of seasons now, so the chemistry is already well established. NSA returns players like George Pettaway and Jaden Freeman who are expected to improve on their seasons from last year. The team has been receptive to what Fuhrmann has been teaching, and they feel it will translate to a good season.

“It’s our job to go out there and adjust and learn the things he is teaching us,” Pettaway said. “One thing that’s been on our side is the team chemistry and how we feed off of each other.”

“He has been good with everything,” Freeman said of his new coach. “It was easier for us to adjust to him and vice-versa. He knew some of us from playing against us last year, so he knew what we had and what we could do.”

Fuhrmann likes a fast-paced style of play in his team. He was more than happy with the foundation of fundamentals that has been laid by previous coaches. There will be a lot of talent returning in the conference, so no major expectations will be thrown out.

“What I like about my team this season is that we’ll be very versatile,” Fuhrmann said. “We have a group I believe can be in the mix with the other teams for the top of the TCIS. There are going to be some tough games, so we are going to have to work hard.”

NSA will officially start its season Nov. 29 when the team hosts Stonebridge School.

The Lakeland High School Cavaliers are gearing up to start their season next week officially, and the season kicked off... read more