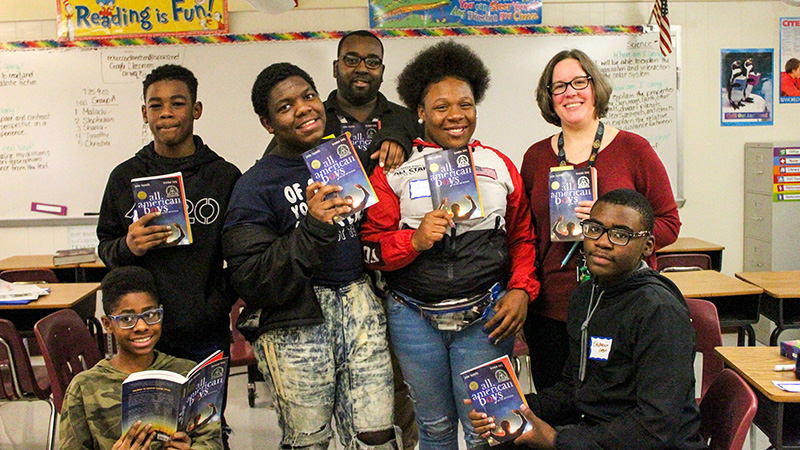 Suffolk Public Library was one of 100 library systems nationwide chosen for the Great Stories Book Club, and the library chose to partner with Turlington Woods for the program.

“We chose the empathy theme for the Great Stories Book Club, because the books and discussions allow students to explore conflicts through a variety of perspectives,” Teen Services Senior Librarian Asa Heyward said in a press release.

High school students had the opportunity to read “Stuck in Neutral” by Terry Trueman.

Middle school students had the opportunity to read “All American Boys” by Jason Reynolds and Brendan Kiely, and they started the second session in mid-October.

“I chose the book because it’s important that teens and adults have a dialogue about empathy,” Heyward said.

The titles were selected in consultation with humanities scholars and librarians to inspire teens — especially those facing difficult circumstances or challenges — to consider big questions about the world around them and their place in it, ultimately affecting how they view themselves as thinkers and creators.

“All American Boys” follows the perspectives of two young boys, one black and one white, and how they deal with police brutality and racism in their community.

The story covers themes like empathy, protest and racism, and the five students in the club spent time discussing the book with Heyward and their teacher, Rebecca Davidson.

“I’m excited about my students having an opportunity to look at important current issues from multiple perspectives,” said Davidson. “This kind of reading and discussion will hopefully help to heal some of the cultural divides my students experience every day and feel helpless to improve.

“This book is very realistic, and I really think the students can connect,” Davidson added.

Heyward thinks “Stuck in Neutral” is especially important. The book is a realistic situation dealing with a teen who has been diagnosed with cerebral palsy, and Heyward believes it’s important for the students to be able to relate to characters in a book.

“We have to put it at the forefront that they are not alone, and that’s easy when they see others and can relate,” Heyward said.

The library also received resources and training, including travel and accommodations for an orientation workshop in Chicago. The training allowed them to better facilitate discussion about the books.