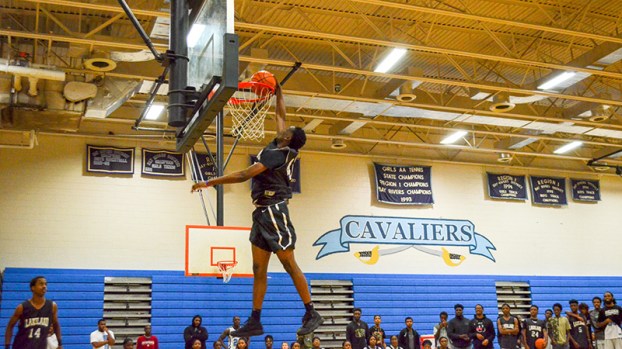 It was an electrifying night of basketball, cheer and school spirit in the Lakeland High School gymnasium Tuesday evening.

There were competitions between students and alumni, performances with dancing and music, a generous donation and a well-deserved award, all for an audience that filled the bleachers.

Winter Madness sold more than 200 tickets by the time the cheering, music and raucous applause ended. The school held the event to build hype for its basketball and cheerleading programs, which are approaching the official start of their seasons, and to benefit the Suffolk News-Herald Cheer Fund.

It was also an opportunity for alumni to come home in support of their alma mater. More than 20 alumni cheerleaders were counted on the court, plus more than a dozen alumni basketball players, according to boys’ varsity basketball head coach Clinton Wright Sr.

“That was my single most exciting moment to see,” Wright said about the returning players and cheerleaders who came back to support the school Thursday evening. “That says a lot about Lakeland camaraderie. I never would have imagined that we would have the type of energy that we had.”

Junior varsity, varsity and alumni cheerleaders and girls’ and boys’ basketball players were on the court to show their shared school pride. One alumna, Kayla Barnes, 18, was honored with her own 1,000-point banner in recognition of her impressive tenure with the team.

These are reserved for players that score at least 1,000 points in their years playing high school basketball.

“It feels good,” Barnes said after she received her banner. Her two families joined her at midcourt — the one she has at home and the other she’s found with her team. “I helped my team work hard and I worked hard also.”

The boys’ varsity team squared off against alumni while the girls’ varsity team was split for an intersquad matchup. Cheerleaders danced as speakers blared a thundering soundtrack of hip-hop and dance music.

Admission raised money for the Cheer Fund, which collects donations each year to purchase toys around Christmas for local children in need. Wright presented a $300 check to Suffolk News-Herald Editor Tracy Agnew during the event.

Donations can be made in honor of or in memory of loved ones. Donations can also be marked anonymous if the donor chooses. Those who wish can also have their photo taken presenting the check.

For the third year, Westminster Reformed Presbyterian Church will invite children to the church for “A Night in Bethlehem.” Staff... read more