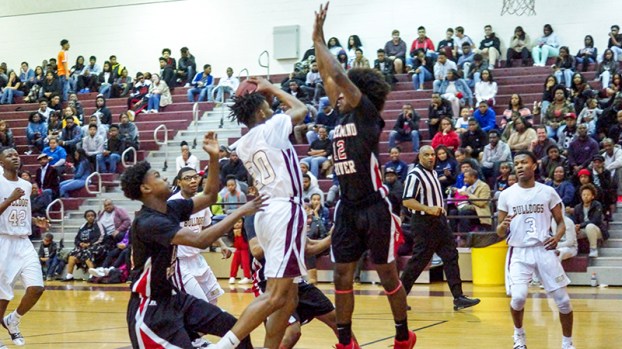 Keontae Boyette takes the ball to the rim in a game last year against Nansemond River. The Bulldogs are excited about their second year under Coach Rick Hite. (Caroline LaMagna Photo)

Coach Rick Hite returns for his second season with the Bulldogs boys’ basketball team, and he is excited about the team’s potential.

Last season, Hite came in as only the second boys’ basketball coach in King’s Fork High School history. The Bulldogs made a seamless transition to Hite’s coaching, as he was able to lead the Bulldogs to a regional playoff appearance before the season ended.

In year two, Hite believes that is where the most progress happens when a new coach comes into the program.

“Year two, a lot of coaches will tell you, is a big leap year,” Hite said. “From fundamentals to X’s and O’s and just knowing each other, the transition is always great. I think we are farther along than even I expected.”

The Bulldogs lost James Hatton, an All-State performer, from last year’s team. However, they do return seniors Leontre Bailey and Keontae Boyette. Both were instrumental in the playmaking the Bulldogs had last season. Boyette was an all-region performer. Xavier Lewis and Kevin Williams return, while the Bulldogs have added Tyler Chatman. George Beale will step in and also add more talent to the Bulldogs’ roster. Darius Wilson returns as well. He played a lot of minutes down the stretch for the Bulldogs last year.

“I think we have a good mix of returners and new guys,” Hite said. “They have a good hunger about themselves, and I’m excited about it.”

The Southeastern District will return with a lot of talent as well. Hite feels good about the team’s chances of playing well in the district. The Bulldogs have a nice out-of-district schedule and are hosting multiple showcases, as well as their annual Christmas tournament next month, featuring cross-town rivals Lakeland High School and Nansemond River High School.

“Our guys feel we can match up with anybody and that we can beat anybody,” Hite said. “We have a tough schedule against some very good teams, and I wouldn’t want to have it no other way.”

King’s Fork wants to take the season step by step; they want to be among the top teams in the district and state and win championships. However, ultimately, they want to look back on their season and say that they have made significant improvement from what they did last year.

“Our goal is a state championship,” Bailey said. “Coach Hite has been putting us in position to be great young men on and off the court. It’s about keeping that mindset that we can take things to the next level. If we take care of business, we can have a great year.”