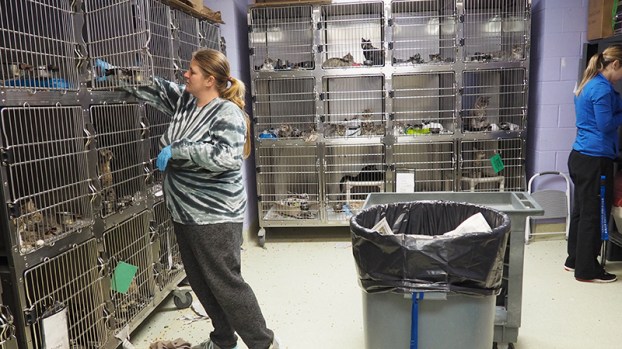 Part-time attendant Emily Glickman cleans cages in the shelter’s cat room. Cleaning is supposed to be done before the shelter opens, but on Nov. 16, due to persistent staffing shortages, it had yet to begin as of 10 a.m. (Stephen Faleski/The tidewater news)

Isle of Wight County’s animal control office is less than five months into its 2018-2019 fiscal year but has already exceeded its annual budget for overtime pay by 60 percent due to persistent staffing shortages at its animal shelter.

“Filling a schedule is always a challenging task, especially when the operation calls for coverage 365 days out of the year,” Potter said. “Even though the shelter may not be open to the public, staff must still come and feed [the animals] and clean the shelter. So, as with all Sheriff’s Office operations, staff must work holidays and provide coverage for others when they are out sick and on vacation.”

He added that one of the shelter’s part-time attendants also recently gave notice that she plans on leaving her employment with the county. Now, some shelter volunteers say they can no longer keep up with the workload.

“My being at the shelter every weekend has shown me there is a need for additional staffing, particularly in the morning,” said Alexandra Hodges, a volunteer from the southern end of the county who spoke during citizens’ time at the Isle of Wight County Board of Supervisors’ Nov. 15 meeting. “Kennel cleaning starts at 8 a.m., and this goes well into the opening hours of the shelter.”

The shelter, she said, opens to the public at 10 a.m. most days. If there is no paid person to answer the phone, volunteers must do so, resulting in time for cleaning the kennels and caring for the animals getting pushed further and further back.

“We have to fill in for roles that should be filled by staff,” Hodges said. “They [volunteers] are a hardworking group, some of the most dedicated, compassionate folks I’ve had the pleasure of working alongside, but they cannot keep up with the work level.”

The following morning at 10 a.m., part-time kennel attendant Emily Glickman said, “We have not even begun to clean our adoption room. We’re open to the public at this point.”

She added, “We get pulled in about 100 different directions,” and said it was difficult to complete a task before being assigned another.

That day, she said, there was only one full-time animal control officer on duty.

“If we got a call for a stray dog, she would have to leave us here to finish cleaning everything,” Glickman said.

Christina Crowder, the full-time attendant on duty that day, added that shelter staff used to be able to finish cleaning everything before the shelter opened to the public, but this required four to five full-time employees on-site for two hours.

“We normally get done closer to 10 or 11 a.m. if volunteers are present, but schedules are not consistent,” Crowder said.

“You name it, we do it,” volunteer Chris Lovette said. He said that he typically works with the shelter’s dogs. Some volunteers also transport animals for medical appointments.

One task volunteers cannot do, he said, is access the shelter’s computer system to process animal surrenders, when someone wants to give up a cat or dog. This must be done by whatever paid staff is on duty.

“Our shelter is a complex, 24-hour-a-day operation that operates every day of the year,” Potter said. “We will house well over 200 dogs and cats a month. Our staff works to place these animals for adoptions or to place them with pet rescues or foster services until a permanent home can be located. Our animal control officers deal with domesticated animals such as dogs and cats, as well as cows, horses, hogs and other farm animals on a weekly basis. Recently during one animal abuse case, we had to seize numerous dogs, as well as seven hogs, which required special housing and care.”

The shelter also receives help from inmates at the Western Tidewater Regional Jail, but they are restricted to cleaning dog kennels and assisting with feeding the animals, and must be accompanied by a jail officer at all times.

“It takes usually five people to work any style shift,” said Maj. Joseph Willard, chief deputy at the Isle of Wight County Sheriff’s Office, who also addressed the supervisors on Thursday. This is also true of the Sheriff’s Office, he said.

He added that it was not just the two officers out on medical leave that are causing the staffing shortage. The shelter needed additional help even before that occurred, he said, explaining that the shelter does not have enough staff to fill in for sick days and holidays.

According to Potter, the Sheriff’s Office has presented its concerns regarding staffing at the shelter to county staff and to the Board of Supervisors on several occasions, and the county has authorized the hiring of part-time temporary shelter staff and animal control officers to assist during the staffing shortage. However, he said it has been difficult to find qualified candidates willing to work on a part-time, temporary basis.

At the board meeting, County Administrator Randy Keaton said that when he prepared the county’s 2018-2019 fiscal year budget, he did not recommend hiring any additional full-time animal control officers or attendants because he believed the staffing shortage would resolve itself when the two officers on medical leave returned to duty. Suffolk, by comparison, has three times the population of Isle of Wight, he said, yet the city has five full-time animal control officers plus a chief, which amounts to two more officers than Isle of Wight.

Potter added that in each budget cycle, the Board of Supervisors has been “very receptive to our needs and the needs of the shelter.”

“Recently, they have approved replacing all the animal services vehicles, which had extremely high mileage and had gotten costly to repair,” he said.

When asked if the staffing shortage had caused any consequences to the level of care shelter animals receive, Potter said that despite the shortage, the shelter takes every measure to see that its animals are cared for in a timely manner. Animals are fed each day and kennels are cleaned on a daily basis. The county also has a veterinarian routinely visit the shelter.

“Our shelter is known throughout Hampton Roads as being one of the cleanest and most well ran shelters in the area,” he said.

Isle of Wight County Schools are attempting to actively identify and evaluate children ages 2 through 21 who are in... read more