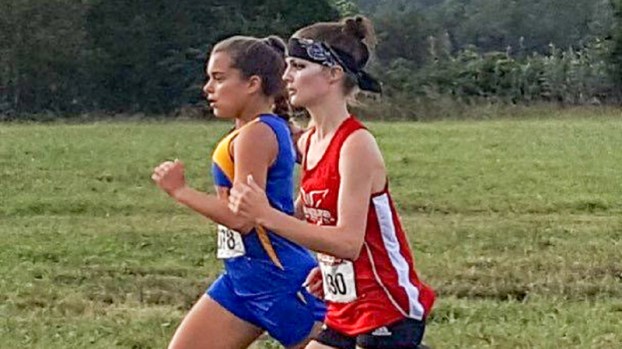 Danielle Perry was voted Suffolk News-Herald Player of the Week after finishing 26th in the Class 5 state cross country meet.

The cross country season recently wrapped up, and Perry was recently among some of best runners in South Hampton Roads. The Nansemond River High School junior recently had a strong season, which led to an even better postseason. At the Class 5 Region A meet just before the state meet, she finished sixth and then went on to the state meet to finish 26th. Perry felt like she exceeded expectations.

“I had hoped to be in the top 50 finishers,” she said. “So, I definitely exceeded my expectations. Overall, I was just hoping for a good pace and a solid time.”

She was one of two people from Suffolk Public Schools that qualified for the state meet. Focus was important for the meet, because the conditions were not ideal. It was also a different course than she had previously run on the whole season.

“It was definitely very cold that morning,” she said. “But I barely felt it during the race because I was too focused running a good pace and passing the girls in front of me. I was nervous, because I had never run the course before, and it was the biggest race of the season for me.”

Perry transferred in and immediately made an impact for the Warriors. She had previously been living in Pennsylvania. Cross country helped her get acclimated in the Suffolk area and make friends before school started. This is her third year running cross country, and she has family that travel to see her races. Her family, along with her teammates, motivate her to be the best she can be when she is running those courses.

“I’ve had fairly successful seasons in the past,” Perry said. “I just want to keep building on what I’ve done. My family, friends and coach are all so supportive.”

“Danielle came to us from Pennsylvania, and the team fell in love with her immediately, and she immediately became a team leader, and a teammate that is inspirational,” Coach Brian Kershasky said about her earlier in the season.

In the spring, Perry will also try to compete in outdoor track. In her spare time, she still visits family in Pennsylvania and spends time with her friends.

New Saints boys’ basketball coach Chris Fuhrmann is excited to start the season with his new team. For the third... read more