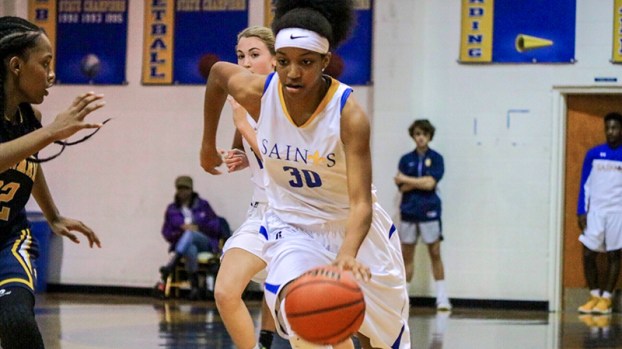 NSA starts season on the road

The Lady Saints basketball team is ready for the season to begin as they start out on the road against Norfolk Academy Tuesday night.

Nansemond-Suffolk Academy’s girls’ basketball team will tip things off hoping to improve on last season’s 10-10 finish. They advanced to the second round of the state tournament last year before their season ended.

The Lady Saints will have a young team this year that will feature six freshmen. Coach Kim Aston is expecting some growing pains, but nonetheless, she is excited about the potential the team has this season.

“We have three starters returning along with a very young team,” Aston said. “I feel like we have the pieces to the puzzle. We just have to put it together and get some experience under our belt.”

Against Norfolk Academy, Aston wants to see the team come out with a lot of intensity, specifically on the defensive end. NSA wants to create offense from their defense. With a younger team, NSA will adjust the way they play. Aston wants to push the ball in transition more and create turnovers with presses and traps. Patience will have to be required from players and coaches this season, as the younger players gain more varsity experience and work through their mistakes.

“We have had conversations about it,” Aston said. “They are going to miss layups, and things are going to happen. What we can control is our energy and effort every game. Long as we are playing hard, mistakes are what we can live with. This group has a good attitude, and they like playing hard together.”

NSA will be looking for its first win of the season at 5:30 p.m. Tuesday at Norfolk Academy.

The Suffolk Christian Academy girls’ basketball team hopes for a strong season this year. With the season under way and... read more