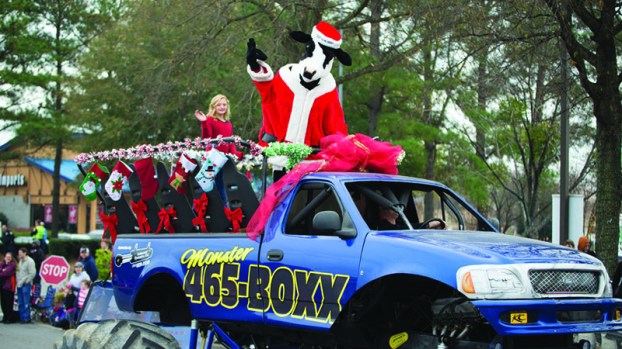 The Chick-fil-A cow waves from one of the vehicles during a previous Chick-fil-A Christmas Parade at Chesapeake Square Mall.

Families will watch as holiday festivities circle around Chesapeake Square Mall on Saturday for the seventh annual Christmas Parade.

Sean Hess, owner and operator of the Chick-fil-A beside the mall, started the event years ago with former marketing director Andrew Riddick to get the community energized for the holidays.

“What I hope is that it brings the community closer together,” Hess said.

The theme for the parade this year is “new beginnings,” and more than 60 floats have signed up. Hess said that may change depending on Saturday’s weather forecast, but it’s still the greatest turnout for registration yet.

“We’ve got everything from marching bands to full-on floats to Suffolk Humane Society dogs,” he said.

Thousands have come out each year to watch decorated floats, holiday costumes and classics cars. This year will also have Christmas-centric Chick-fil-A cow costumes, a 12-foot inflatable cow and Chesapeake Mayor Rick West riding in a catering vehicle.

The grand stage area has been moved this year closer to the center of the mall, in front of the former Toys ‘R’ Us. Hess said that six sets of bleachers have been added to the grand stage area to make sure more people have a great view of the proceedings.

Hess has operated at Chesapeake Square for decades, and this event is meant to give back to this supportive community.

“It’s just a great event for the Western Branch community,” he said.

The parade will begin at 9 a.m. and is expected to last until about 10 or 10:15 a.m. depending on the number of vehicles. The mall will be accessed from Portsmouth Boulevard via Capri Circle, between the Wendy’s restaurant and UPS store, from about 5:30 a.m. up until the end of the parade.

The Suffolk Police Department is asking citizens to “Stuff the Police Car” as they shop around the city during Small... read more