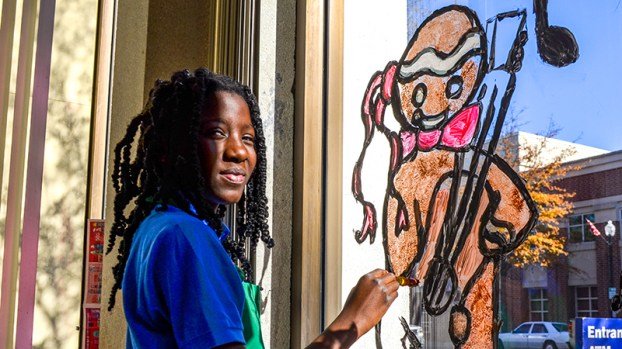 Between Tuesday and Thursday this week, 80 Suffolk students from elementary to high school will paint the town for the holidays at 10 different downtown businesses, according to Lesa McNamara with Suffolk Public Schools.

Teachers have been working for months with students to come up with the designs based on the theme of “Jingle Bell Rock.” These will decorate the windows in bright, festive artwork just in time for the Holiday Parade on Saturday.

“They’re asked to paint using that theme, but they can do anything as long as it relates to Jingle Bell Rock,” McNamara said.

That included Bank of America, the Suffolk Peanut Center and even the Suffolk News-Herald, where fourth- and fifth-graders from Creekside Elementary School sang their favorite Christmas songs while painting ornaments and snowflakes on the windows.

Brighter Day Café on Main Street got even brighter when fifth-graders from Northern Shores Elementary passed different colors of paint back and forth. Andrea Lazell, 11, helped put the final touches on a big musical note on the window topped off with a Santa hat.

“It’s the holidays, there’s a lot of Christmas music and the hat represents Christmas,” Andrea said with paint brush in hand.

This is the 18th year that this holiday painting has been organized. McNamara coordinates with art teachers at Suffolk Public Schools, and city spokeswoman Diana Klink reaches out to businesses that would like to participate, McNamara said.

It’s the second year that Brighter Day Café co-owners Jen and Garet Watters have opened their doors to the young artists. Jen Watters said it helps “brighten up” downtown in a way that she hadn’t seen since she and her husband first moved to the city 12 years ago.

“This just makes it more festive,” she said.

Her husband likes that it gives children something exciting to do downtown.

“The other neat thing is when the kids finish and are able to come back with their family and friends, they’re able to look over and go, ‘Hey, you know what? I did that,’” he said.

Angie Salerno, art teacher at Kilby Shores Elementary School, has been bringing students to paint downtown for the holidays since it first started. Her mother, Ann Felton, has also joined her ever since she retired from teaching third grade.

The pair brought Salerno’s talented art students to the lobby of SunTrust Bank, where paint splattered on newspaper underneath the window glass.

“It’s easier to throw away newspaper than it is to clean somebody’s carpet,” Salerno said with a laugh.

Her fifth-graders embraced this year’s theme with an acoustic guitar player made of gingerbread beside caroling reindeer and a snowman on drums. Savannah Askins, 11, painted an elf with an electric guitar in a bright masterpiece as big as herself.

“I liked it, because I’ve never drawn or painted an elf. This will be my first,” Savannah said.

She enjoyed having a day off from classes to do what she really loves for everyone to see. She said it felt “freeing.”

“You can do what you want to do and paint instead of work,” she said.

Salerno said it’s a great opportunity for young artists to flex their creative muscles and bring some cheer downtown.

“It gives them a lot of confidence and a lot of pride in their work,” she said. “We get to share their talent with the community, and we always look forward to doing it.”

Hundreds of people came to Chesapeake Square Mall on Saturday morning, many with their blankets, lawn chairs and travel mugs... read more