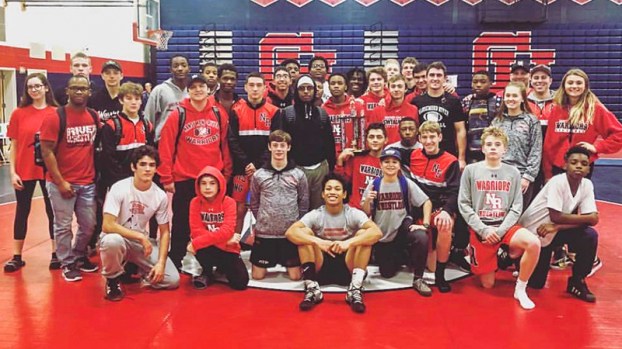 The Nansemond River High School wrestling team is expected to have a strong season. They return this season as the reigning region runner-up. (submitted photo)

NR primed for a strong season

The Nansemond River High School wrestling team is set for a strong season this year.

Last season, the team was the sectional champion and the Class 5 Region A runner-up. The Warriors sent seven wrestlers to the state tournament last season, and five have returned this season.

Nansemond River should be able to jump right back in and be not only a favorite for the regional title but possibly for a state title as well.

“I think we are going to be pretty good this year,” coach Tripp Seed said. “Guys who are in our lineup all wrestled last year, so we have some experience and a nice group of talent.”

Evan Rawls, Aaron Whear and Zach Gray all return this year. Whear and Gray were region champions last year in their respective weight classes. Nansemond River also added a transfer in Andrew McDougal, who was a regional champion at Deep Creek High School. Matt Hensen and Kenneth Hansin along with JaQuelle Harrell add more experienced talent to the group. Seed believes that the team could be in the talks for a possible Class 5 state title.

“We are pretty good from top to bottom,” Seed said. “We feel like we have a few kids to contend for a state title. Obviously in order to do that, we have to be wrestling our best once February comes. It’s all about how we are wrestling down the stretch.”

The consistency has been key for the Warriors wrestling program the last few years. Seed attributes that to having athletes who wrestle year-round and a good group of assistant coaches he has had throughout the years.

“This my 12th year, and it’s an expectation now when you come to wrestle at NR,” he said. “We want to be great. We don’t want to be mediocre, and that has helped us become consistent.”

Over the weekend, the Warriors wrestled at Colonial Heights High School and finished well. They went 5-0 for the meet, which was solid for a first outing. Nansemond River also didn’t have its full team.