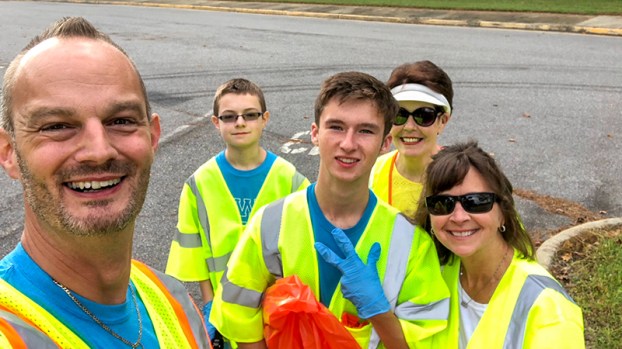 Leaders and congregants from Oakland Christian United Church of Christ participated in Keep Suffolk Beautiful’s Church Cleanup Challenge for the second year this fall. In all, 10 churches coordinated a dozen cleanups throughout Suffolk. (submitted photo)

Ten Suffolk churches helped keep Suffolk beautiful this fall with an organized effort to get congregations involved in litter cleanups.

Keep Suffolk Beautiful organized the Church Cleanup Challenge, which launched in September and lasted through Nov. 18. Ten churches helped coordinate a dozen cleanups during those eight weeks, according to a city press release. This amounted to 141 total volunteers with support from their respective churches.

“We started this fall challenge last year knowing that churches are leaders in the community,” Keep Suffolk Beautiful Chairwoman Kathy Russell stated in the press release. “We thought they would make a strong partner for environmental stewardship in the fight against litter.”

“They helped make our city a cleaner place to live, work, play and pray,” Russell stated.

Jones said it was roughly the same number of churches that participated last year, and the hope is to get more and more volunteers each year.

“We’re planning on doing it again next year, and hopefully we’ll get more signed up,” he said.

The Rev. Ed Lilley, director of Christian education and youth for Oakland Christian United Church of Christ, cleaned up Audubon Road behind Oakland Elementary School in early October with about a half-dozen other volunteers from the church.

It was the second year that Oakland Christian UCC members participated in the challenge. Lilley said it’s important for church members to give back to their local community first and foremost, and they always have fun doing it, whistling like the seven dwarves in Snow White.

“My mom made me do that while we were doing chores (growing up),” Lilley said, laughing.

Lilley has joined cleanups in numerous places over the years, from Baltimore to South America. He said that service work leaves a deep, lasting and positive impression for all those involved.

“Service work adds a depth of narrative to an individual’s life, and it affects other individuals’ quality of life (as well). It’s (about) more than the environment. It’s the community,” he said.