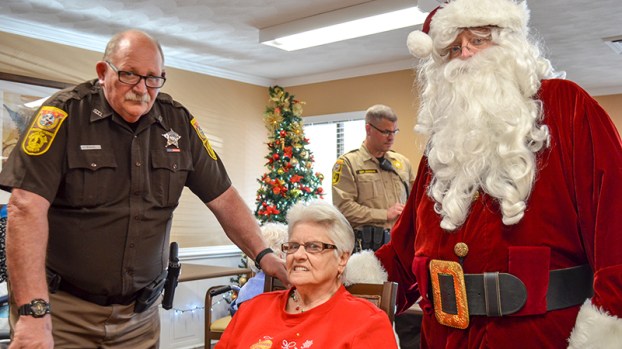 The Sheriff’s Office brought an afternoon of bingo and Christmas cheer to residents at Autumn Care of Suffolk on Thursday, including Deputy J.C. Patterson in his best Santa Claus outfit.

About two dozen of the 100-plus residents at Autumn Care sat down with bingo cards and chips. Sheriff E.C. Harris manned the bingo ball cage as Autumn Care staff and deputies helped the residents fill out their cards.

“Your card is looking better than mine,” Deputy Tim Johnson said. Funkhouser was a winner shortly thereafter.

There were more than 30 stockings filled with necessities like toothbrushes and shampoo, along with crossword puzzles, teddy bears and other fun stocking stuffers.

“We try to make sure that everybody that comes in here will be a winner,” said Katie Jones, community engagement coordinator for the Sheriff’s Office. Patterson brought Santa hats to residents in their rooms, and all other leftover gifts were later distributed by staff.

Jones said the Sheriff’s Office “adopted” Autumn Care years ago when a deputy’s late father was a resident there. They developed a relationship with the staff and residents and have come throughout the years to spend time with them ever since.

“It’s not about what we bring; it’s the time we’re spending with them while we’re here,” Jones said. “I think they enjoy it. I know we do.”

Deputies stop by for Valentine’s Day, Mother’s Day and Father’s Day. Veterans in the Sheriff’s Office come visit the veterans living the nursing home, and this year they brought pizza.

Harris said the most important thing is showing the residents that they’re part of the community.

“We want to make sure that the residents here — especially during the holiday season — know that there are people in the community who care about them,” he said.

Corinth Chapel United Church of Christ celebrated its sesquicentennial on Nov. 17 at the grand ballroom at the Paul D.... read more