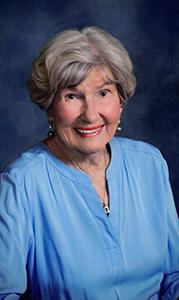 Phyllis Harrill Stancill Pruden, a 50-year Suffolk resident, retired elementary school teacher and mother of five, died Dec. 6 in Chesapeake. She was 96 and had lived a full and blessed life.

She is the widow of Peter DeWitt Pruden Jr., her second husband, who was a well-known ham producer in Suffolk. They married in 1999. Before his death in 2005, the couple established a network of college scholarships and generously supported churches and hospitals.

She was married to Godfrey Wells Stancill, the editor and publisher of the Suffolk News-Herald, for 50 years until he died in 1995.

Mrs. Pruden was an avid bridge player and traveler, but her heart and energy were lavished on her five children and six grandchildren.

She often said her life’s greatest accomplishment was “raising five good children” and kept her son and four daughters close with frequent calls and visits. She also took pride in her independence and lived by herself in her Suffolk home until a fall last spring.

Mrs. Pruden was the daughter of the late Carral Long Harrill and Roy Reid Harrill. A native of Rutherfordton, N.C., she moved to Elizabethton, Tenn., as a child.

She graduated from Sullins College in Bristol, before transferring to the University of North Carolina at Chapel Hill, where she graduated. There, she met Stancill, a U.S. Navy officer, and they married in February 1945 before his departure for World War II in the Pacific.

When he returned, the couple lived in Elizabethton, where Stancill entered the newspaper business. She was an ardent supporter of the local newspapers that Stancill led in Suffolk and Radford. An English major with a penchant for penmanship and grammar, she sometimes wrote wedding announcements for the papers.

For 25 years, Mrs. Pruden was a dedicated teacher in the Suffolk Public Schools, at Andrew J. Brown Elementary, Thomas Jefferson and Elephant’s Fork Elementary. She was delighted to run into former students from the Suffolk area and was proud of their accomplishments.

She was a longtime member of Main Street United Methodist Church, the Constantia Chapter of the Daughters of the American Revolution, the Riverview Garden Club and the Tuesday Afternoon Book Club. She had served on the board of the Genieve Shelter, an organization devoted to domestic violence prevention.

Mrs. Pruden is also survived by her sister, Carolyn Testerman, of Rogersville, Tenn., a niece and three nephews. She was predeceased by her brother, Frank Harrill.

A service to celebrate her life will be held at 1 p.m. Jan. 5, 2019, at Main Street United Methodist Church, followed by a reception at the church atrium. The family is being assisted by R.W. Baker & Co. Funeral Home and Crematory. Condolences may be registered online at RWBakerFH.com.

Memorial donations can be made to Main Street United Methodist Church or the Genieve Shelter.