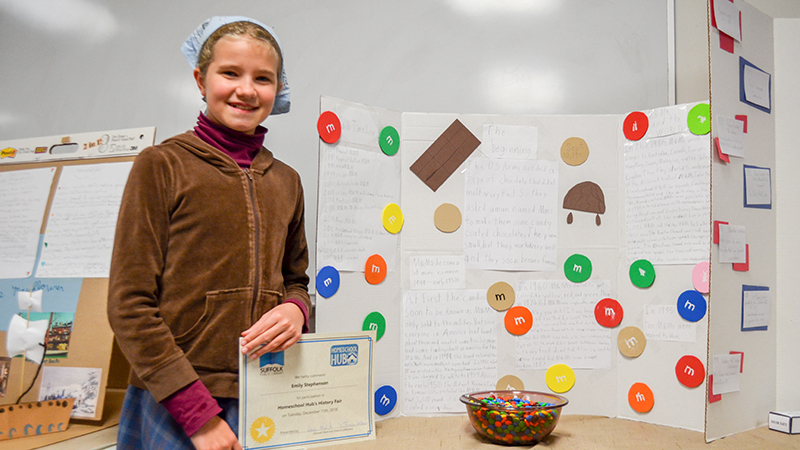 Emily Stephenson, 11, shows her certificate for completing the Homeschool Hub History Fair at Morgan Memorial Library on Tuesday, next to her presentation on M&Ms.

Children came to Morgan Memorial Library on Tuesday with posterboards and props that were both authentic and delicious. The 2018 Fall History Fair capped off another session of Suffolk Public Library’s Homeschool Hub program, and these students were eager to show an audience of 20-plus parents and library staff what they learned.

The seven presentations covered topics like the Age of Exploration and the voyage of the Mayflower. Some of the greatest inventions of the Industrial Revolution were highlighted in another presentation, complete with a working telegraph.

The young Stephenson sisters were eager for their presentations in period-accurate regalia from their activities in the Youth Virginia Regiment history club. Eleanor, 9, discussed the history of women’s suffrage, and her older sister Elizabeth, 16, showed the origin and timeline of the British Red Cross, or as it was called at its founding in 1870, “the British National Society for Aid to the Sick and Wounded in War.”

Elizabeth had an original copy of the British Red Cross manual, ether mask, tourniquet and forceps from her participation with another re-enactment group. She showed as she talked about how the Red Cross was either reuniting families outside of combat during World War II, or heading straight into the fray during German blitzkrieg operations.

“They were ambulance drivers. They carried stretchers. They rescued people from bombed buildings,” she said.

Her younger sister Emily, 11, had another wartime story to tell, but in a candy shell. She told the history of M&Ms with a bowl of the crowd-pleasing treats to share in the library meeting room.

She started in the 1930s when Forrest Mars Sr., son of Mars Company founder Frank C. Mars, saw other soldiers in the Spanish Civil War eating Smarties, which were chocolate pellets covered in hardened sugar syrup. She explained that the soldiers needed a chocolate snack that wouldn’t melt in their hands.

This gave Mars the original idea for M&Ms, and Emily went on through decades of different styles and flavors. She said her favorite part of the project was learning about holiday varieties that were made in 1986 for Easter and Christmas.

Homeschool Hub students meet bi-monthly at either North Suffolk Library and Morgan Memorial Library during the school year. According to Elementary Services Senior Librarian Deborah Ward, there were an average of 60 homeschooled students from pre-kindergarten to 12th grade between both library locations throughout the fall session.

The program is meant to enrich the children’s curriculums with hands-on activities and learning opportunities.

“I feel that homeschool families rely heavily on the community for that support, and the library is a wealth of knowledge for them,” Library Services Coordinator Shawna LoMonaco said. “It only makes sense to bring the two together.”

Each Homeschool Hub session ends with a presentation to give the children public-speaking experience, LoMonaco added.

“It sort of brings together everything that we learned over the session, and it gives the family the opportunity to strengthen their curriculum,” she said.

Brittany Hamlin was beside her husband Brandon as she videotaped her 6-year-old son Nathan’s presentation on the Age of Exploration, with his sister Ellieahna, 4, standing beside him for support, according to Hamlin.

She said Nathan loved a recent boat tour of Roanoke Island and was excited to do a presentation on even more boats.

“He loves all kinds of artsy stuff, so this was something that he loved,” she said.

She was also glad that he got an opportunity to present what he learned in front of a whole group of people.

“I think it’s really important for homeschoolers to get in front of other kids their age and be able to do public speaking and be able to overcome any fears they might have,” she said. “I try to do everything I can to make sure he gets out and does a lot of different (things).” 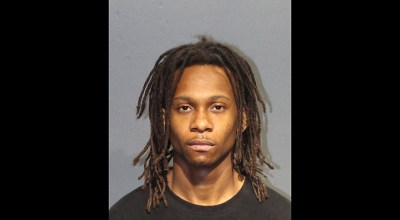 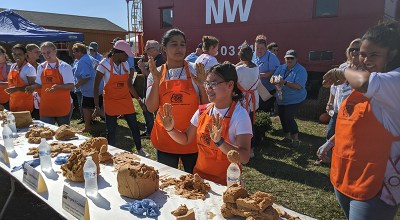 One person dies in crash