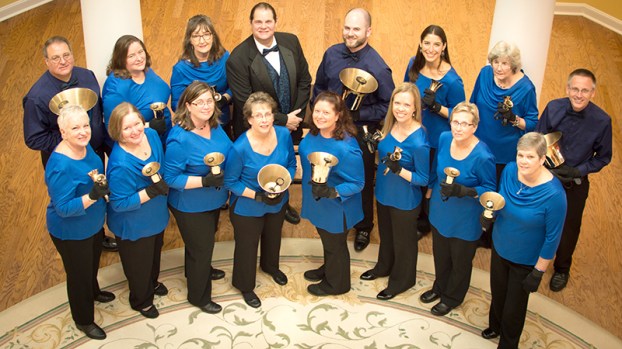 The Virginia Handbell Consort will be performing in Suffolk at St. Paul’s Episcopal Church this Saturday. They will perform traditional and new age Christmas music. (Submitted Photo)

And the bells, they’re ringing

The sounds of Christmas bells will be in Suffolk this weekend as the Virginia Handbell Consort performs a concert of holiday classics at St. Paul’s Episcopal Church.

“You will hear traditional carols and carol melodies, but you will also hear some more current and popular ones as well,” said VHC Director Al Reese.

Some of the tunes featured will include “It’s the Most Wonderful Time of the Year” and “Have Yourself a Merry Little Christmas.” They will also be playing the handbell version of the Trans-Siberian Orchestra’s “Christmas Eve (Sarajevo 12/24).”

The group features men and women from all over the Tidewater and Western Tidewater region, with folks coming from Williamsburg, Suffolk, Virginia Beach, Chesapeake and Smithfield to be a part of the handbell consort.

While the group wants to spread Christmas cheer, they want to bring attention to handbell ringing and legitimize the art form.

“People think of it as little old ladies at Christmas, but it is so much more than that. We want to get people to realize that handbells are a legitimate ensemble,” Reese said. “We are working to legitimize the handbell choir in the chamber music world.”

The group puts in hours of work to make sure that the audience hears the music at its best, but they also have to put in work because handbell ringing as an ensemble takes skill and passion.

“Imagine 11 people crowded around a piano each playing one note with one hand at just the right time,” Reese said. “With a group of us playing one instrument, it’s a real challenge to play a melody. It’s really even more of a team effort because no one gets to play the melody alone.”

Along with the precision that is required of the musicians to play the notes at the right time and pace, the musicians have to get the visuals right. Other musical instruments, like a violin or a wind instrument, don’t allow the audience to see the exact note being played, but each note is on display during a handbell concert.

The group is passionate about the music they perform, and this is one of seven concerts that they will do during the holiday season.

“We share the handbell passion for sure, and each week we have a two-and-a-half-hour rehearsal. It never feels like enough,” Reese said. “We share the love of handbells, but we have quite the diverse backgrounds in our group. We have retired teachers, salespeople and college professors.”

Reese is the only member of the group that is considered a professional musician.

The group will perform at 4 p.m. Dec. 15 at St. Paul’s, 213 N. Main St. The performance is free with a free will offering. The program is anticipated to last an hour and a half.

Buildings are coming down and testing is under way to clean up an old ordnance depot in North Suffolk for... read more