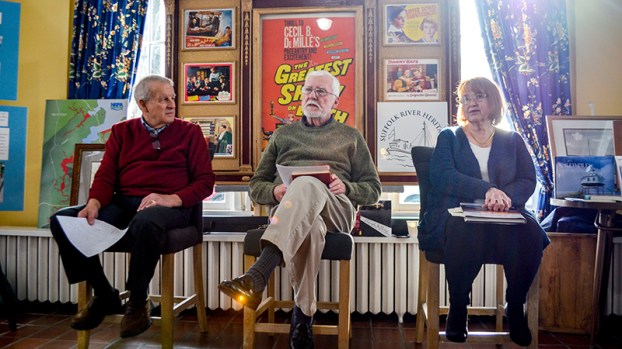 Bill Cary, Wayne Martin and Claudia Holland on the panel for the latest session of Afternoon Conversations at the Phillips-Dawson House on Wednesday.

‘A very idyllic place to grow up’

More than a dozen visitors were at the Phillips-Dawson House on Wednesday to hear about the rich history of Suffolk watermen — along with their families — while sharing a few of their own.

It was the latest in a series of Afternoon Conversations that the Suffolk Public Library has organized with the Suffolk-Nansemond Historical Society to present regional history and other local topics of interest in free, public presentations.

The library reached out to the Crittenden-Eclipse Village Preservation group, and Eclipse resident Kelly Hengler arranged a panel of storytellers for the session, as well as representatives from Suffolk River Heritage and the Nansemond River Preservation Alliance.

The “Crittenden-Eclipse Village Preservation” page on Facebook has amassed hundreds of followers since it was first established in late August. The group’s goal is to preserve local wetlands, as well as the rich heritage of watermen that made their living in these waters.

“We decided as a village that everyone had to have a voice,” Hengler said to the Thursday audience. “Our historians, our authors, our lineages and our families.”

Wayne Martin has been an Eclipse resident for 30 years and has worked on the water for most of his life. It’s a way of life that he can trace back to his father and grandfather, who had about 800 acres of oyster beds on the James and Pagan rivers, Martin said.

“They would go up the James River where the sturgeon were and fish for 300- to 400-pound sturgeon,” he said.

Martin has long since retired but he still finds inspiration on the water for his creative pursuits, right outside of his home. He brought several of his watercolors to the presentation, several of which were raffled off to the audience.

One was of a blue heron that he often finds perched on an old, dead tree limb that hangs in the marsh behind his and his wife’s house.

“We named him Waldo,” Hengler said while holding Waldo’s watercolor likeness. “He would pop up over and over again, and he has an affinity for Wayne’s wife. He’ll just come up to her and just start flapping.”

There was also a copy of “Watermen of Poquoson,” a book that covers several families who worked in the water for generations, including the Martins. Martin discovered that he’s the fifth generation of watermen in his family, going back to the 1700s. His son is the sixth.

“It’s hard to explain,” Martin said when asked what it felt like to read about his family’s history. “I never knew these people and after reading it I just got a sense of, ‘that’s family.’ All these folks are my family. Six generations of them.

“I’d sit back and try to think of what it was like (for them) back then.”

Fellow Eclipse resident Bill Cary sat next to Martin to talk about his own time in the waterside community. He was a “come hither” like Martin, a term that locals use for non-native Eclipse residents.

Cary also talked about his family in wartime. His grandparents on his mother’s side — Johnnie Lee Gray and Eleanor Winslow Gray — had four children, including his mother, Frances Gray Cary, and his uncle, Johnnie Clyde “JC” Gray.

JC served in the Korean War, and roughly a decade earlier, Frances was called to Pearl Harbor after the Japanese dropped their bombs on Dec. 7, 1941. She was there to aid as a nurse, and after she came home and married Cary’s father, she worked at Sentara Obici Hospital and Bon Secours DePaul Medical Center.

Cary had a photograph of his mother in uniform at the presentation. She didn’t talk much about the sailors she helped at Pearl Harbor, he said, but she did mention all the athletes she recognized while she was over there.

“She talked about all of the baseball players that were there that she got to know,” he said, like Harold Peter Henry “Pee Wee” Reese.

Claudia Holland is in the fifth generation in the neighborhood on her mother’s side, the Dickson family. Her great-grandfather owned Dickson Oyster House in Eclipse, where Johnson and Sons Seafood now operates.

Holland said Eclipse put the saying, “It takes a village to raise a child” into practice and looked back on her childhood memories with fondness.

“It was a very idyllic place to grow up,” she said.

Stories like these have been collected, written and published by Karla Smith and Larry Saint of Suffolk River Heritage. The book “The River Binds Us” has Martin’s old boat on the front cover, and copies of that and other works were raffled off as well.

Since 2006, Smith said, Suffolk River Heritage has been working to preserve the rich history of these families through countless hours of interviews and research.

“We knew that we had good stories in our communities. They just had to be collected,” she said.

The NRPA works to protect the environment that serves as the setting for all of the stories that the speakers and audience told each other on Thursday. The organization even shares an office with Suffolk River Heritage in the CE&H Ruritan Hall on Eclipse Drive.

NRPA President Elizabeth Taraski discussed the environmental programs her organization conducts in schools, throughout the communities and in the local waterways, especially to foster appreciation for Suffolk’s natural splendor among its youth.

“The whole idea is to get them out and experience Suffolk,” Taraski said.

Those experiences will stick with them for decades, like how Cary would dive off Bunkley’s dock and spend hours swimming in Chuckatuck Creek.

“I thank the good Lord for being able to live in Eclipse,” he said. “It’s a great place to live, and I hope it stays there.”

Police have identified the man who died in a crash on Whaleyville Boulevard on Monday evening. Robbin Pierce, 58, was... read more