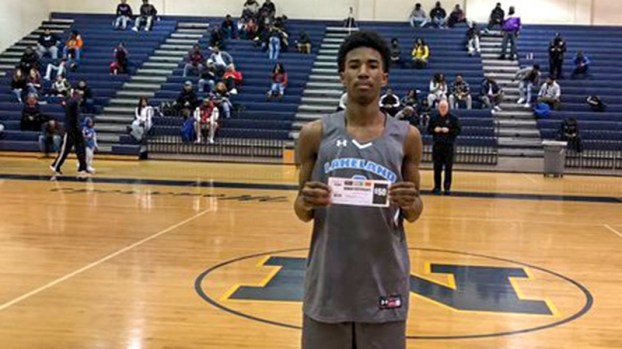 Raymond Bellamy was voted Suffolk News-Herald Player of the Week after posting 21 points in the Cavs third win of the season. (submitted photo)

Bellamy all about winning

Raymond Bellamy was voted Suffolk News-Herald Player of the Week after posting 21 points in the Cavs’ third win of the season.

The Lakeland High School boys’ basketball team is off to a strong start this year. They have quickly jumped out to a 4-0 record and looked like an experienced bunch. Last season, there were rough waters as Lakeland’s players lacked varsity experience. This year, that is different, and Bellamy and the rest of the Cavs look fearless.

Bellamy, in particular, has gotten off to a fast start for Lakeland which has included multiple double-figure-scoring games. His highest total of the season was the 21 points he scored against Deep Creek High School.

“I felt good about my performance, mostly because we got the win,” he said. “Besides just scoring, I also got my teammates involved, and when I was catching fire, my teammates were looking for me.”

Bellamy is an all-around player for Lakeland. In the second game of the season against Thomas Jefferson High School in a Richmond Showcase, Bellamy was awarded the game MVP. He scored only five points but had eight assists and eight rebounds to help Lakeland to a win. Every game, Bellamy tries to find a way to get better while doing the things that give his team the best chance to win.

“I feel as though I am playing well,” he said. “Just trying to get better every game and doing everything I can to make myself and my team better.”

The Lakeland junior doesn’t have any personal goals for himself this season; he just wants to win. The main goal he has is for Lakeland to make a deep playoff run this season. Even though he is a junior, playing basketball in college is a real possibility for Bellamy. Giving himself an opportunity to earn a free education is what motivates him when he is on the court. Also, his late grandfather is also motivation for Bellamy.

Over the summer, Bellamy focused a lot on working on his jump shot and getting stronger. Kobe Bryant is someone he likes to watch and learn. He also wanted to be more efficient with the ball in his hands by not turning the ball over. Playing under Coach Clint Wright has helped with his confidence. He teaches him a lot and is helping Bellamy get to the next level.

“He is never shaken,” Bellamy said of Wright. “The way he carries himself just gives us confidence, and we feed off of that.”

Bellamy and the Cavs will be back in action again Tuesday night on the road against Great Bridge High School.