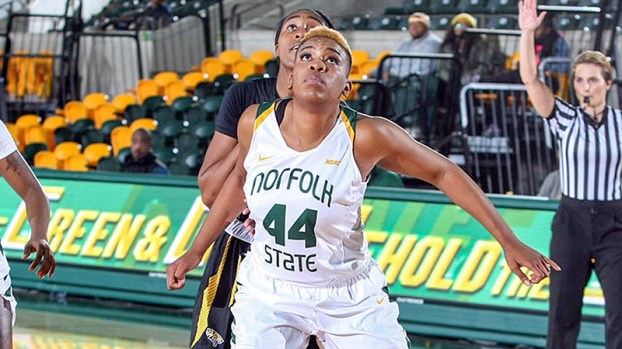 Former King’s Fork High School basketball standout Khadedra Croker just became the sixth player in NSU history to record more than 100 blocks in a career. The senior is currently averaging 6.3 points per game and has nine total blocks so far on the season.

Last season, Croker played very well defensively. She recorded the single-season record for blocks in a season with 93 last year. She ranked first in the Mid-Eastern Athletic Conference and third in Division-I with 3.4 blocks per game and also topped the conference in blocks.

Croker was playing so stout at the rim that she blocked six or more shots multiple times for NSU last year. That also led to her being named MEAC Defensive Player of the Week six times last season. It was her first time playing for NSU last season after having to sit out because of transfer rules, as she was originally playing at Virginia Tech.

At King’s Fork, Croker was a nationally ranked player and a highly regarded recruit. She helped the Lady Bulldogs to a 21-3 overall record in 2013-2014 and a regional berth. On top of that, she was named Ironclad Conference Player of the Year and earned MVP honors two years. She topped the 1,000 career-rebound mark and recorded more than 1,000 points and nearly recorded 1,000 career blocks. She was the first basketball player, boy or girl, to record 1,000 points and 1,000 rebounds at King’s Fork.

Nichols earns Player of the Week