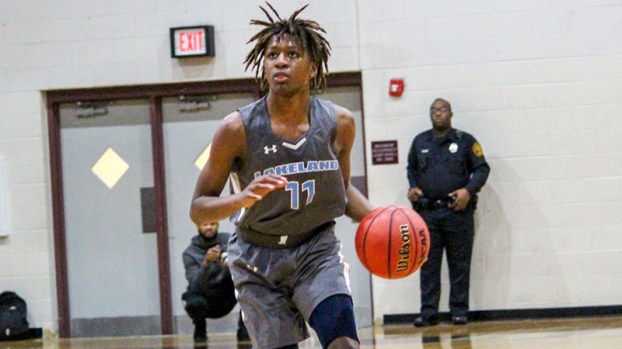 Clint Wright Jr. had a career-high 30 points over Churchland High School on Saturday. He was named the game’s MVP. (Matthew Hatfield photo)

Basketball is a family affair for the Lakeland Cavaliers. Last season’s team struggled through a 6-18 campaign. They didn’t notch their fifth win of the 2017-18 campaign until Feb. 7.

Following an 82-69 victory over Churchland during the Greyhound Classic at I.C. Norcom High School in Portsmouth on Dec. 15, the Cavaliers are now 5-0 overall as they appear to be one of the state’s top contenders at the Class 3 level.

“What a difference a year will make. We played a lot of games, about 44, over the summer, and that got a lot of the kinks out. These guys have a tremendous camaraderie,” said Lakeland Coach Clint Wright Sr. “We knew what type of game Churchland would play, and they would really come after us. It was just a matter of us settling down and going with our game-plan.”

Trailing by as many as six points in the opening period, Lakeland hit the Truckers with a 23-11 second-quarter surge to claim a 41-31 advantage by halftime. The catalyst was junior guard Clint Wright Jr. as he made eight of his first 11 shots, including four behind the three-point line, on his way to a sterling 21-point first half.

“Before the game, I was real focused and knew we had a big game. Last year, they blew us out and had a running clock. This time, we took matters into our own hands and decided we were going to win this,” said Wright Jr., sensing a different vibe about this season’s squad.

“The fear is absent. We were scared at times last year, but this year we’ve come together as a team. Our chemistry is there, and it’s all clicking.”

Wright Jr. poured in a career-high 30 points on 9-of-16 shooting from the field and 5-for-7 behind the arc. He also went a perfect 7-of-7 at the foul line and had three assists. His performance was sure to catch the eye of scouts and college coaches in attendance.

“I think I shoot the ball consistently, shoot free-throws well, set my teammates up and play good defense,” Wright Jr. said in assessing his own play. “Since I shoot a lot of 3’s, I’ve also been working on my mid-range shot, because sometimes they’re going to close out on me or play a box-and-one. I’m trying to work on scoring at different levels.”

Dad likes what he’s seeing, too.

“I’m excited about his progress and the efficiency that he played with,” said Wright Sr. “What many don’t know is he’s also a biomedical and honor student with a 3.4 GPA at Lakeland, so he does it in the classroom and on the basketball court.”

Churchland would cut the Lakeland lead to four, 62-58, entering the fourth quarter. Then the Cavaliers pulled away as they got steady play from a host of contributors, namely the likes of Quentin Livingston, Kiemari Artis, Raymond Bellamy and freshman Bravion Cample.

“Even though Clint had 30, I do feel that we have six or seven different players that can score those buckets for us. Quentin is probably the most versatile player that we have and holds an offer from North Carolina A&T. He can do all of the intangibles, and you can’t knock his hustle. Ray is one of the taller point guards and, being a primary ball-handler, sacrifices some scoring to facilitate the team and plays sound defense,” Wright Sr. said.

“Kiemari is one of the best finishers in the Southeastern District. Bravion has tremendously quick feet, and coming off the football field, he’s finally now getting into basketball shape. Very few players can play as physical as he can, but [he] has a way of harnessing that energy.”

Artis had 19 points and was a perfect 10-of-10 at the foul line. Bellamy chipped in 14 points. Livingston nearly had a double-double with nine points and eight rebounds, and likewise for Cample, with eight points and eight boards off the bench.

With the improvement Lakeland is showing, it might not be far-fetched that Wright Jr. gets to have a moment on the big stage similar to current Lakeland assistant and older brother Derek, a two-sport standout at King’s Fork whose three-pointer late in the fourth quarter remains one of the most memorable moments from their 2009 AAA state championship comeback win over William Fleming.

“I would love for Clint to take that shot at VCU the way Derek did,” Wright Sr. admitted. “But we’re going to take one game at a time.”