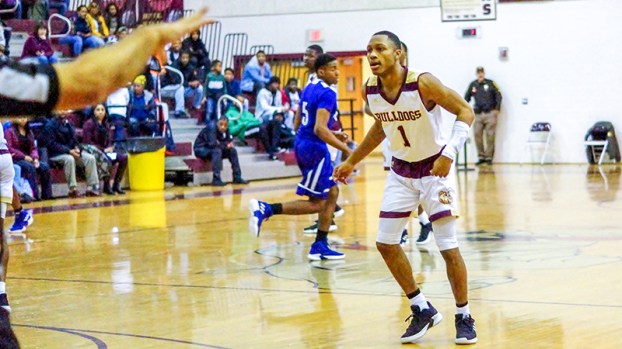 Many considered Tuesday’s game the toughest challenge for King’s Fork to this point in the season. It was close, but the Bulldogs came out victorious, taking a 56-50 win.

The teams went back and forth in the first quarter, with the Bulldogs sticking to their plan of not beating themselves. At halftime, they carried momentum as they went into the half up 26-22.

In the second half, it was all about executing for the Bulldogs on their way to their sixth win of the season. Keontae Boyette went for 15 points to lead the Bulldogs in scoring once again, while Kevin Williams came off the bench and added 14. Coach Rick Hite described the game as a great win.

“The game wasn’t too big for us,” Boyette said. “We came into the game prepared, and we wanted to make a statement.”

Hite expressed taking advantage of all opportunities before the game. The Bulldogs made a conscious effort after their loss to Western Branch High School, another really good team, to correct their mistakes. Down the stretch against Western Branch, the Bulldogs didn’t take care of the basketball like they wanted to, and they didn’t get stops. The game against Oscar Smith provided them a chance to right their wrongs, and they were able to do that.

King’s Fork will head into the holiday break with some great momentum at 6-1. Next on their schedule is the Holiday Tournament they will host next week, and the Bulldogs believe this win has them right where they want to be.

“With the way we practice and compete, I believe these guys will stay grounded with a tough schedule coming up,” Hite said. “We have some great teams in our tournament, and we have to come ready to compete. We can’t think since we beat Oscar Smith everything will be given to us. It doesn’t work like that.”

The Lady Bulldogs moved to 6-2 on the season with a win over Oscar Smith High School Tuesday night. King’s... read more