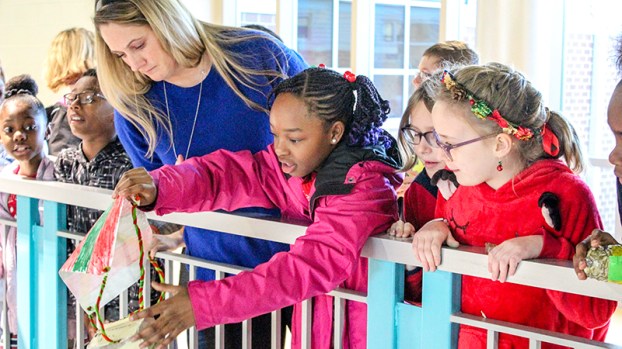 To get into the holiday spirit, students at Col. Fred Cherry Middle School were dropping eggs off the second floor Tuesday morning with the help of students from Creekside and Northern Shores elementary schools.

The Makerspace Club at Col. Fred Cherry, the fifth-grade gifted students from Creekside and the all-girls STEM club from Northern Shores participated in a competition to see who could drop a holiday ornament that was cradling an egg from the second floor — without breaking the egg.

“We have been working on an ornament design challenge after being given a real-life problem,” said Col. Fred Cherry gifted resource teacher Megan Farabaugh. “They had criteria to follow, and they had to brainstorm as a group before creating a prototype.”

The students were hired to “work” for a fictitious decoration company called Tinsel Trinket LLC, and they were tasked with designing an unbreakable ornament, because customers were tired of them breaking when they fall.

All students, no matter their grade level, were provided with the same materials — craft sticks, Styrofoam, pipe cleaners, Legos, cardboard, tin foil, straws, paper, tape and cotton balls. The only criteria were that it had to be durable when dropped and still reflect the magic of the holiday season.

Students worked in pairs or small groups, and each of them had the chance to drop their prototype off of the second floor of the middle school with Farabaugh.

Whether the egg broke or stayed intact, the students cheered and watched with joy at each and every attempt.

Madison Knox, 9, was part of a group with Ava Joyner, 9, and Caroline Diggs, 9, from the all-girls STEM group at Northern Shores. Their prototype, which came equipped with a paper parachute, kept the egg safe.

“I was very happy, and it was amazing to do,” Madison said. “Everyone had their own moments, but we each got our chance to share ideas. It took a lot of hard work.”

A large chunk of the elementary school students’ eggs survived the impact, and they were proud to see their hard work pay off. Even if their eggs broke, they were already brainstorming what they wanted to do next year.

Lanae Barnes, 13, was still happy, despite her group’s egg breaking once it hit the blue tarp on the first floor. She’s hoping to come back to the middle school next year and volunteer with the event.

“We basically got to use our imagination and bring out our creative side for this,” Lanae said. “We get to do this for fun, and we also get to explore what we might want to do when we grow up.”

To keep the spirit of competition going, both Northern Shores and Col. Fred Cherry principals, Lori White and Dr. Shawn Green, designed their own unbreakable ornaments to drop. Northern Shores was the winner this year.

The morning was filled with laughter and a lot of discussion on topics of STEM — science, technology, engineering and math — and their teachers were happy to see them enjoying the work.

“I think they did great. They even wanted extra time to keep working on their ornaments,” said Northern Shores gifted teacher Nina Valdivieso. “Even if their egg broke, they were OK. It’s not about the final product, it’s about the process.”

Farabaugh and her colleagues are already planning to do this competition again next year, and they plan to do something like it in the spring.

“It was very exciting. This gave them something to work together and collaborate on, and they were excited to compete against other students at Col. Fred Cherry,” said Creekside gifted resource teacher Anna Russell.

Students at Kilby Shores Elementary School had the chance to participate in some Christmas cheer last Friday during their annual... read more