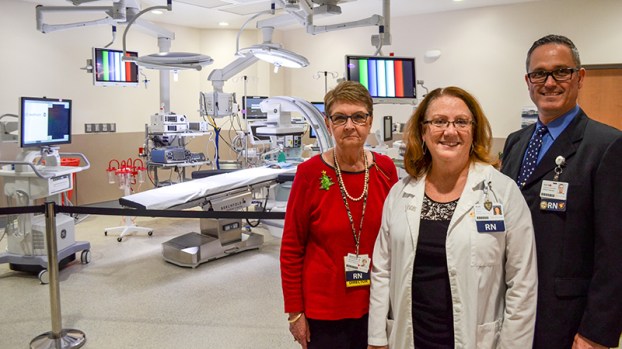 Sentara Healthcare is expanding its services at the BelleHarbour campus in North Suffolk with a new facility designed to provide immediate care that’s close to home.

Hourigan Construction broke ground on the 92,000-square-foot building in May 2017, which is connected to the original BelleHarbour building on the ground floor. Construction at the new building has finished and renovations to the emergency department in the original building — with 17 treatment spaces increased to 22 — will be finished in March.

The new structure on the campus houses a state-of-the-art ambulatory surgery center. This center recently opened and was introduced to Hampton Roads Chamber guests during an open house Wednesday evening.

“We think it’s going to be a very nice addition to what Sentara has brought to Suffolk and Western Tidewater,” said Dr. Steve Julian, president of Sentara Obici Hospital and its subsidiaries, Sentara BelleHarbour and Sentara St. Luke’s in Isle of Wight County.

Patients go to the second floor for treatment in the roughly 20,000-square-foot ambulatory surgery center. This is for low-acuity care cases such as hernia repair, vascular access and podiatry issues.

“Anything you can have done in the same day and go home that same day. That kind of care,” said Ruth Fowler, manager of the ambulatory surgery center.

Patients are taken to one of 14 pre- and post-operation rooms both before and after surgery. Procedures are undertaken in an equipped operating room and another procedure room, with one more of each available for outfitting when future growth demands it.

These operating rooms are 600-square-feet, temperature- and humidity-controlled spaces. Staff and patients benefit from modern aids like shadow-less lighting, backup generators with emergency redundancies and picture and video feed on monitor displays.

Computers in each room are fully integrated for direct access to patient medical records for immediate reference and updates.

“These pictures we take flow directly into their electronic medical records,” said Dianne Boone, director of surgical services for Sentara Obici and BelleHarbour.

Patients recover in one of six bays — including an isolation room if need be — and are just a short walk down the hall to their original pre/post op room, all overseen by the same team of staff for better communication and continuity of care.

“They’re all within feet of each other,” said registered nurse Mary Mace. “That is what’s key to me in an ambulatory surgery center. It’s a team effort.”

This center was built at the BelleHarbour campus to provide immediate, low-acuity care to patients that live locally, rather than having to drive across Hampton Roads.

“Our entire purpose here is to bring care closer to people in the neighborhood,” Julian said.

To get into the holiday spirit, students at Col. Fred Cherry Middle School were dropping eggs off the second floor... read more