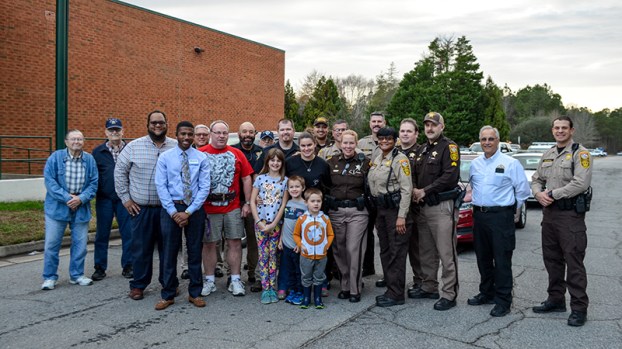 More than a dozen active and retired law enforcement helped deliver Christmas care packages on Friday for the 23rd annual food deliveries organized by the Fraternal Order of Police Lodge No. 41.

Christmas dinners served by the law

Law enforcement officers loaded their cars with care packages outside of the Kroger on North Main Street, then delivered them to families throughout the region before the sun went down on Friday.

More than a dozen active and retired law enforcement from Suffolk and Isle of Wight County volunteered for the 23rd annual holiday food deliveries organized by the Fraternal Order of Police Lodge No. 41.

They delivered 25 baskets to 25 families across Suffolk, Holland, Whaleyville, Pughsville, Windsor, Smithfield and Isle of Wight County, according to Lodge Director Allan Iversen. Families were nominated by the Western Tidewater Community Services Board, the Suffolk Sheriff’s Office and others.

Each package included a 10- to 15-pound turkey, a pie, a gallon of iced tea, four cans of vegetables, a bag of fresh fruit, a five-pound bag of potatoes, stuffing, gravy and cranberry sauce, Iversen said. It was the first year that the new Kroger store partnered with the lodge for the event.

“This is great work that you all are doing for the community. Thank you all for doing it,” store manager Donati High told lodge members on Friday.

Each care package is a blessing for a family that struggles around the holidays. Sgt. William Brooks of the Suffolk Sheriff’s Office brought Christmas dinners to people living in downtown Suffolk.

Erica White said “God is good” when Christmas dinner arrived in her kitchen.

“It’s a blessing that I was able to receive this. I have four kids and I’m a single mom, so this definitely helps out a lot,” she said.

“It’s a good thing to do for the community,” he said.

Iversen has been part of the annual holiday deliveries since they first began 23 years ago. This year, the lodge spent more than $3,500 for these care packages along with its annual Cops and Kids event on Dec. 17, when officers shopped at Walmart with children that otherwise wouldn’t have had much for Christmas, if anything at all.

Iversen said that it helps to let citizens know that there are officers who care about them, even when they’re off duty.

“Our goal is to try and help out as many people as we can,” he said.

Children ‘dazzled’ for the holidays

Staff at Hampton Inn Suffolk delivered another “Holiday Dazzle” for children on Friday, with plenty of fun, festive and messy... read more