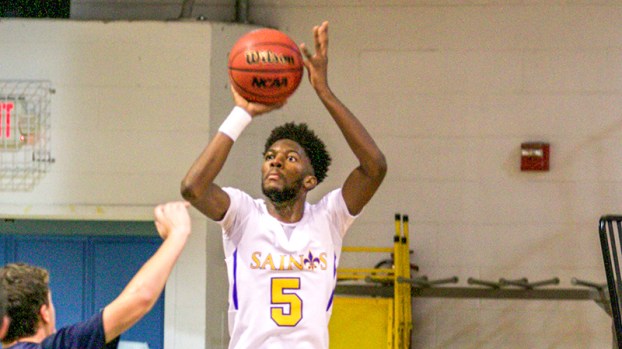 The Saints head into their winter break at 8-2. They competed in a tournament at Atlantic Shores over the weekend and split the two games they competed in. NSA opened up the tournament against Indian River High School, a formidable Southeastern District opponent.

After starting off with a 16-2 lead after one quarter, Indian River fought their way back to cut the deficit down. Eventually, Indian River swung the momentum back their way and as both teams battled back and forth, the Braves took the game 54-51.

“I felt like we lost our focus a bit out there, and it kind of put us in the dog fight the rest of the way,” Coach Chris Fuhrmann said. “It was definitely a learning experience for us, and I’m glad the guys were able to bounce back.”

In a consolation game Saturday, NSA took on Carmel School in a game that went into two overtimes. NSA came out with the win 76-71. It was a gutsy performance by the Saints, Jaden Freeman leading all scorers from both teams with 27 points. Kaleb Brown, Kemauri Spencer and Austin Dugas each scored in double figures in the Saints’ win.

“I felt like the guys did some good things,” Fuhrmann said. “We had guys step up that normally didn’t get that much time, and that’s good to see. We had guys playing every minute of the game just gutting it out. Overall it was a good experience for us, and I was happy with the way these guys fought.”

Prior to the tournament, NSA had games where they had a significant win margin over teams. In the only loss they had they lost by one point, and with the three-point defeat to IRHS, the Saints have two losses by a combined four points — not bad for a team with an 8-2 record.

At this point, Fuhrmann feels like the team is a little bit further along than he originally thought it would be.

“We are in a good spot,” he said. “I felt like the tournament over the weekend helped us identify some things we need to get better at. I’m still learning these guys, so to think we are a couple of points away from being undefeated is pretty encouraging. We want to continue to improve and get ready for conference play.”

NSA will return to action against Isle of Wight Academy at home Jan. 3.

Giles takes game to the next level

Alivia Giles was voted Suffolk News-Herald Player of the Week after recording a career-high 29 points in a Nansemond-Suffolk Academy... read more