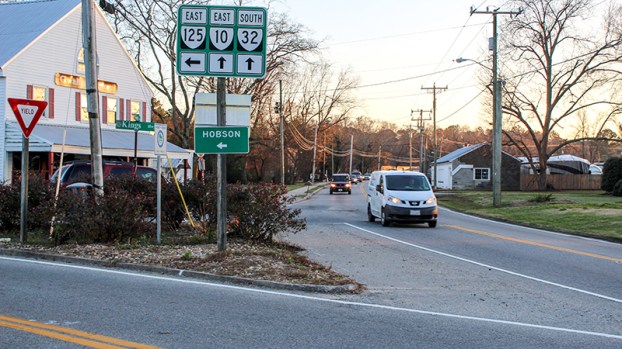 The crossroads of Godwin Boulevard and Kings Highway is slated for some improvements to help drivers better navigate the intersection.

Plans for Chuckatuck intersection in the works

The city of Suffolk is evaluating bids from three companies to make improvements to the cumbersome intersection of Godwin Boulevard and Kings Highway.

City staff decided to investigate alternatives to the intersection after receiving complaints.

“Intersection improvements were proposed to improve safety and to allow for more vehicular throughput,” said Acting Public Works Director L.J. Hansen. “The primary complaint had to do with visibility at the intersection, especially as it relates to vehicles moving from Kings Highway to Godwin Boulevard.”

Visual obstacles in the median island of the intersection and the absence of a left turn lane from southbound Godwin Boulevard onto Kings Highway were pointed out as issues with the intersection.

The Public Works Department will not be tackling the entire project at once. The project will be done in phases, and the city is currently working on the first phase, which involves clearing up the visual impairments.

“Some lighting and power poles have already been removed. The process of undergrounding the utility lines in order to remove the last pole is ongoing,” Hansen said. “After all utility work is completed, we will address the landscaping and removal/relocation of other signage and visual obstacles.”

The current phase of work is anticipated to finish in January, but some of the landscaping may not finish until there is more temperate weather.

Other improvements have not yet been scheduled, but they will include evaluating the design of the intersection.

“After a more thorough assessment of need, future phases will deal with the geometrics of the intersection itself,” Hansen said.

Work on the physical layout of the intersection will have significant impacts on the community surrounding it, and other construction projects in the area will affect the traffic pattern at the intersection.

The current phase of work will not cause any significant traffic interruptions, because most of the work is happening in the traffic island or underground.