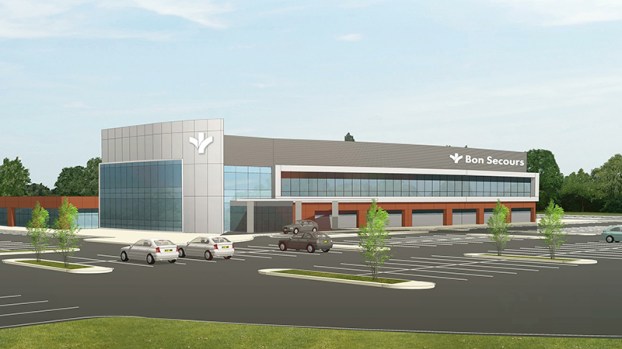 Bon Secours filed the COPN application in July in order to transfer 18 acute-care beds and four operating rooms from Bon Secours Maryview in Portsmouth, and build a short-stay, surgically-focused hospital on the Bon Secours Harbour View campus in North Suffolk. The Virginia COPN program requires owners and sponsors of medical care facility projects to secure a COPN from the State Health Commissioner before initiating such projects.

This new hospital has long been a vision for Bon Secours for the past decade, according to Bon Secours Maryview Chief Executive Officer Paul Gaden, and it was just a matter of time.

Bon Secours expects to invest about $77 million to build the 75,000-square-foot, two-story facility at the northeast corner of Bon Secours Drive and Harbour Town Parkway, according to the press release. This facility is being designed to deliver efficient surgical care to patients, with specialties and procedures that require a short length of stay.

Gaden said that this will be Virginia’s first inpatient facility with a surgical focus.

“Operations will be geared toward providing that high-touch, efficient care so we can return the patient back to their home setting as soon as possible,” Gaden said.

Bon Secours Maryview will also continue to offer comprehensive inpatient and outpatient care at its Portsmouth campus. Gaden added that the transfer of beds and operating rooms will allow for improvements at Maryview — such as larger and more modern operating rooms — that will address the population’s developing needs.

Bon Secours has been a provider in the North Suffolk community for nearly two decades, and one of the “first believers” in the area’s development, Suffolk Economic Development Director Kevin Hughes said.

The Sentara proposal was for an inpatient, acute-care hospital with 24 acute-care beds, two general-purpose operating rooms and one CT scanner at the Sentara BelleHarbour Campus on Bridge Road. Only the proposed addition of a CT scanner was recommended for approval.

Sentara recently opened an ambulatory surgery center on the BelleHarbour campus. That building is complete, and the expansion of the 24-hour, freestanding emergency room in the original building should be finished in March, according to spokesman Dale Gauding.

“With continued population growth and demand for services in North Suffolk, we will wait for an appropriate time to re-file our application for a hospital on the campus,” Gauding wrote in an email.