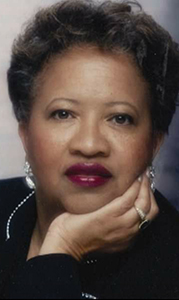 Priscilla Anne Hyman Beamon-Benn, of Suffolk, was born Aug. 23, 1942, to the late Henry and Elizabeth Hyman. She was the oldest of six children and is preceded in death by her parents and her brother, Wilson Hyman.

She was baptized at an early age at Mt. Zion Baptist Church. At an early age, she moved her membership to Oak Grove Baptist Church, and remained a member there until completing college. She became a member of St. Mark Episcopal Church, where she remained until her death.

Priscilla was a dedicated educator, as is evident by her many years teaching in Suffolk Public Schools. Upon retirement, she continued to volunteer and mentor students on a weekly basis. She was also a dedicated member of Delta Sigma Theta Sorority Inc., The Links Inc., Suffolk Retired Teachers Association and the Democratic Party organization.

She was an active member of Saint Mark Episcopal Church, where she served as Sunday school teacher, Bible school and Bible study teacher and also as a lay reader. In the year 2000, Priscilla married Wesley Benn. He remained a loving and devoted husband and caregiver during her most difficult years. Her sons, Alvin and Lester, also played an important role in her care and were always by her side. Priscilla departed this life on Dec. 25, 2018. She is survived by her husband, Wesley; sons, Alvin and Lester; sisters, Elois Wingfield (Maurice) and Phyllis Bookins; brothers, Carver Hyman and Randy Hyman (Linda); in-laws, Clifton Beamon and Faith Newman; uncle, Filmore Artis; and many nieces, nephews and cousins. She also had two devoted longtime friends, Mary Hicks and Vermelle Byrd. Priscilla will be missed by the many lives she touched. To God be the glory.

Priscilla will have an Omega Omega service at 4 p.m. Sunday, Dec. 30, 2018, and a Links Service at 5 p.m. in the Melvin J. Blowe Chapel of Crocker Funeral Home. A celebration of life will be held at noon Monday, Dec. 31, 2018, at Saint Paul’s Episcopal Church, 213 N. Main St., Suffolk, VA 23434. The Rev. Willis Foster will deliver the message of comfort. She will be laid to rest in the Crocker Funeral Home Garden of Carver Memorial Cemetery. Professional services with dignity have been entrusted to Crocker Funeral Home Inc.