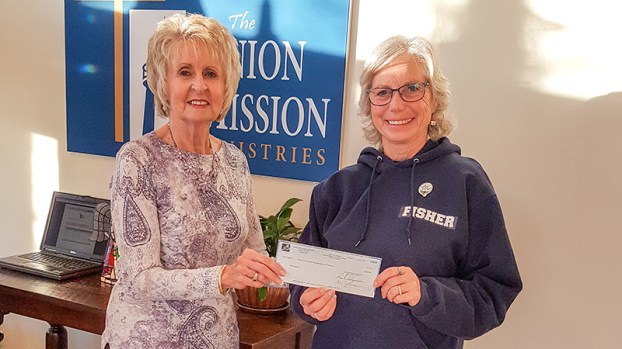 Lakeland teacher Anita Fisher presented a check to The Union Mission Ministries on Wednesday. The funds were raised at school with a spare change collection. (submitted photo)

Lakeland High School’s students dug into the depths of their purses, pockets and bookbags for two weeks to raise money for Union Mission Ministries.

Lakeland teacher Anita Fisher headed up the spare change collection as a part of the LHS Focus Team, and Fisher was proud of the students’ ability to raise enough money to feed 172 people during the holiday season.

“During the two weeks it came in a little bit at a time, but the last day I went around to collect them and I would make a plea for them to look in their bags,” Fisher said.

She made sure the girls were digging deep into their purses and the boys were shaking out their bookbags. According to Fisher, a majority of the money they raised came from that last day of pleading.

“They dumped and they looked, and each and every classroom looked for more change,” Fisher said. “I think we raised the most money the last day. It was a lot.”

The focus group that Fisher is a part of has been doing plenty of fundraisers throughout the holiday season, and she was proud of the students for finding the time to participate and help the cause.

“I don’t know of any one student that didn’t give something throughout the two weeks. Sometimes it was only a couple pennies,” Fisher said.

During the two weeks, Fisher made sure to pick up pennies off of the floor to add to the donation, and she motivated her students to do the same.

“The kids were picking them up in the hallway, and when it was announced on the intercom that we had given 172 people one meal, they were so proud of themselves,” Fisher said. “When everyone comes together, you can do that.”

Fisher and the students were able to do this by having a cup in each classroom, and a student would dump that cup into a jug during the seventh block.

On Wednesday, Fisher brought the money to The Union Mission Ministries in Norfolk.

The Virginia Modeling, Analysis and Simulation Center in Suffolk will be home to two new projects that are funded through... read more