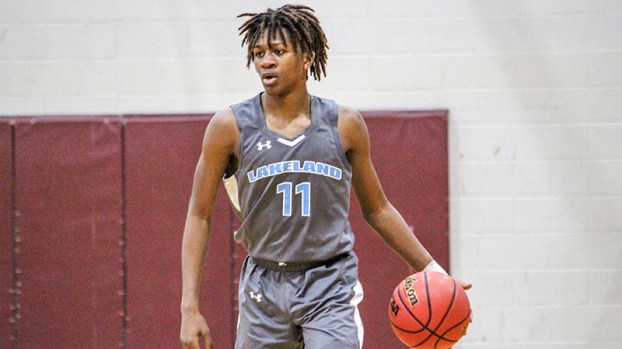 Clint Wright Jr. was voted Suffolk News-Herald Player of the Week after scoring a career-high 30 points in a win over Churchland High School. (Matthew Hatfield Photo)

Clint Wright Jr. was voted Suffolk News-Herald Player of the Week after scoring a career-high 30 points in a win over Churchland High School.

Lakeland High School boys’ basketball team is off to a great start. They sit at 7-1 and are among the top teams in a very tough Southeastern District. The Cavs have an abundance of young talent that is starting to shine in their own individual ways.

Wright is among one of the standouts. He has multiple games where he has led the team in scoring, including his career high of 30 he scored over a Churchland in a showcase.

“Going into the game, I made sure I was focused and prepared mentally,” Wright said. “It was a big game for us. As a team, we all know our roles and what has to be done for us to be successful. My teammates and I took on the challenge, and we were able to be successful.”

At halftime, Wright had scored 21 of his 30 points. When the game ended, he was selected game MVP. His career high and MVP trophy were nice, but the win for his team was what was most important to him.

“During the game, I was paying attention to what was in front of me,” he said. “I didn’t realize until after that I had 30. It felt good to notch my career high. All glory to God. But the most important thing was getting the win, and we did that.”

Wright likes where the team is trending. The Cavaliers are led by his father, Clint Wright Sr. Playing under his father has been great, but it also presents different challenges. Wright Jr. believes that playing under his father could add a bit of pressure, because outsiders often want you to be very good. However, both coach and son find the perfect balance for a father-son relationship and player-coach relationship on and off the court.

“There is so much potential that he sees in me,” Wright Jr. said. “He continues to push me to play at my best on the court and be a better person off of it.”

Wright’s goal for this season is to try to get one percent better every day. The ultimate goal is to win a championship, and he knows getting better every day is the best way to achieve that goal. The gift he has of being able to play basketball is what motivates him. He continues to receive support from his family, friends, coaches, and teammates, and that gives him more than enough reason to continue to get better every day that he can.

During the summer he worked on his game every way that he could. Overall, he wanted to be more vocal and find ways to motivate his teammates, because he knew they’d do the same for him. As a junior, Wright has a chance to continue making himself a household name among South Hampton Roads players. His game will also start to grab the attention of colleges as well.