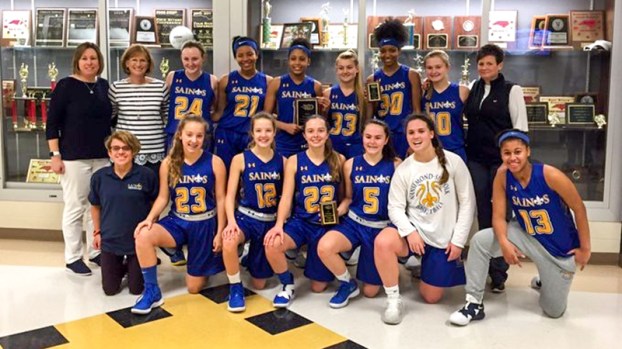 The Lady Saints took on Northeastern High School in the opening round, dominating them 53-19. They then advanced to take on Perquimans, defeating them 46-28 in the championship game.

“The girls played well,” Coach Kim Aston said. “They took care of business the first night, and against Perquimans, the game was pretty close before we broke it open in the second half.”

Aston mentioned that recently she switched the starting lineup to feature four freshmen and a junior. There could be a lot of growing pains in store, but Aston said she feels those freshmen deserved it and that so far, they have been playing well.

“I feel like those girls are getting over their freshman jitters,” Aston said. “Cammy Reid had a good game for us against Northeastern, and Maren Council played well for us the second game. If we can get those two kids playing well, that’s going to help us a lot. All of our young players are getting better, and that’s going to bode well for us going forward.”

Alivia Giles and Council were both selected to the All-Tournament team. Council scored 14 points in the championship game, and Giles scored 12 and added 10 rebounds.

At 6-4, Aston believes the team is where she thought they could be. NSA has more depth than they have in previous seasons, but they are young.

“With us being so young, I was quite sure how we would adjust to certain things,” Aston said. “I am happy with where we are right now. The games we have coming up in the second half of the season are important. We just want to keep continuing to get better.”

NSA will get back in action again against St. Catherine’s School at home at 5:30 p.m. Friday.