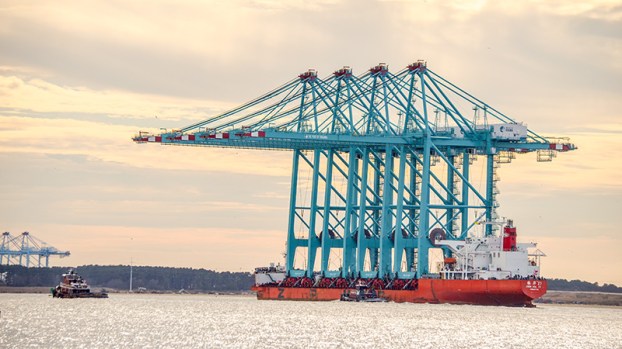 The Zhen Hua 27 arrives at the Port of Virginia on Monday, carrying what are now the four largest shipping cranes in the United States.

The Port of Virginia celebrated a gigantic milestone on Monday with the arrival of the Zhen Hua 27 to Virginia International Gateway in Portsmouth.

The ship finished its long voyage from China in the mid-afternoon chill of the harbor, and standing aboard the ship were four fully-assembled, 170-foot-tall gantry cranes, which are now the largest shipping cranes ever in the United States.

The port signed a contract for these cranes in August 2017, which were built by Shanghai-based Zhenhua Heavy Industries Co. Ltd. The Virginia Port Authority Board of Commissioners approved a spending package of $44.8 million in July 2017 to cover the cost of the cranes, their delivery from China to Virginia and their installation at VIG.

The cranes will be inspected, tested and integrated over the next eight weeks or so before they are put into operation, according to Port of Virginia spokesman Joe Harris.

The Port of Virginia now has 30 ship-to-shore cranes with Monday’s delivery. More importantly, these record-breaking cranes have the outreach to handle the volume of ultra-large container vessels.

Harris said this is about preparing for both currently active ultra-large container vessels, as well as bigger cargo ships that are on the horizon.

“These things will have a lot of life in them in terms of years of use,” he said.

These new cranes are among the final pieces of the $320 million expansion project to increase capacity and efficiency at VIG. The project is expected to be complete this June, after phase two of construction at the railyard has been finished, Harris said.

“The investments being made at Virginia International Gateway and Norfolk International Terminals will set this port up for success and sustainability for decades to come,” Reinhart wrote.

Part of which is the port’s “Wider, Deeper, Safer” project. The project — which received final authorization from the U.S. Army Corps of Engineers last year — will deepen the port’s main shipping channels to 55 feet, allowing for bigger ships to load to capacity.

According to Reinhart, the goal is to show ocean carriers that the Port of Virginia is prepared for the future.

“Having these cranes sail into our harbor says, very clearly, to the ocean carriers and the industry that we are prepared for the next evolution and the one to come after that,” Reinhart wrote. “Combine our land-side investments with the 55-foot channel project, and we will have the necessary foundation in place to drive job growth and economic development across Virginia for decades to come.”

Despite a limited turnout, artists young and old still got to flex their creativity with piles of “trash” at the... read more