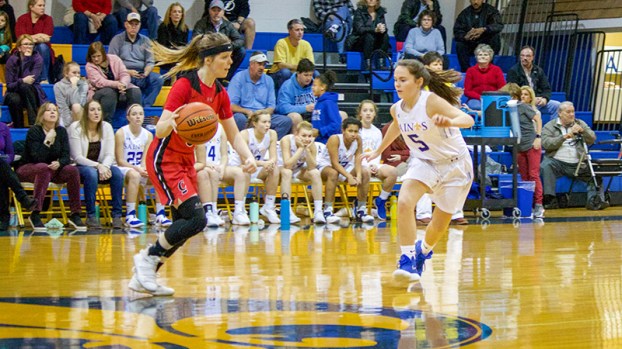 Maren Council guards the ball for the Lady Saints. The Lady Saints got their sixth win in a row against Isle of Wight Academy on Wednesday. (Anthony Giles Photo)

The Nansemond-Suffolk Academy girls’ basketball team won its sixth game in a row Wednesday with a home win over Isle of Wight Academy.

NSA hosted IWA for a rivalry-style matchup that saw the Lady Saints grab a 43-20 win at home. It is the sixth game in a row the Lady Saints won, and it followed up a 50-point victory Tuesday night.

The game was much closer than the score indicated in the first half. NSA had only a 14-10 lead after two quarters of play. NSA outscored IWA 29-10, which included an 18-2 third-quarter swing. Defensively, NSA forced seven turnovers and didn’t allow IWA to score more than 10 points in a quarter. Alivia Giles added 10 points and 11 rebounds. Maren Council went for nine points, and Alyssa Waddy added eight. NSA also combined for 11 assists as a team.

For their third game of the week, the Lady Saints will go on the road to take on Peninsula Catholic at 5:30 p.m. Friday.