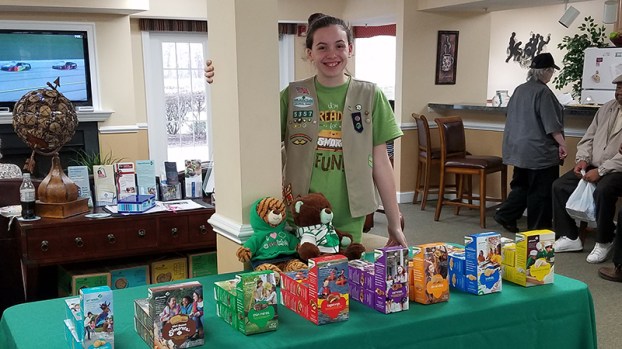 Claire Askew, 13, sold 1,260 boxes of cookies last year. That made her the highest seller in both her troop and her service unit. (Submitted Photo)

Claire Askew sold 1,260 boxes of Girl Scout cookies last year, making her not only the top seller of her troop but also in all of Suffolk.

Claire, 13, is a Cadette and a member of Troop 5357 and Service Unit 360, which covers all of Suffolk, and she has been a member of the Girl Scouts since kindergarten.

“I joined as soon as I was eligible, and this is my ninth year,” Claire said.

Selling at least 1,000 boxes of cookies has been the norm for Claire since she was in second grade, and she’s prided herself on always hitting that goal. Her determination has led her to be the highest selling Girl Scout in her troop most years, but last year was special, since it was her first year being the highest seller in her service unit.

“Well, I’ve been selling at least 1,000 since second grade, and I just kept doing it every year,” Claire said. “This is the first time I’ve been the top of my service unit.”

Her trick is to ask everyone you know along with all the other people you don’t know. Claire and her mom, Joanne Wunderlich, walk around her neighborhood door-to-door to start the cookie selling season.

Girl Scouts started selling on Jan. 5 this year, and Claire has already sold more than 200 boxes.

While selling cookies and raising money for troop trips has been great, Claire loves everything else that being a Girl Scout has given her.

Since she began Claire has gained friends, confidence and valuable life skills, and those skills can be attributed to her hard work and dedication in her troop.

“When I first joined I had just a few friends, and now we are still best friends,” Claire said. “I’ve also learned a lot about leadership. I’ve been in charge of the food and taking care of the fire.”

Claire is proud of the skills she’s learned outdoors. As a Girl Scout she’s learned to pitch a tent, start a fire and navigate nature.

Being in the Girl Scouts even gave her the knowledge to start making a little money of her own.

“I think one of the most useful skills I’ve learned was first aid and babysitting. I started this summer, and without the knowledge, I wouldn’t have made it through,” Claire said.

As she gets ready for her ninth cookie season, Claire can’t imagine not being a Girl Scout, and she believes she wouldn’t be the same girl she is now.

“It’s been the biggest part of my life, and it is some of my earliest memories,” Claire said. “I don’t think I would be as confident or be able to talk to adults so well if I wasn’t a Girl Scout.”

As the cookie season continues, Claire plans to stick to her 1,000-box goal, but she’ll be happy if she surpasses the goal. She’ll be even happier once she gets her own Thin Mints to snack on once cookies are delivered.

City Council will consider the elimination of five of its six standing committees during Wednesday’s City Council meeting. The committees... read more