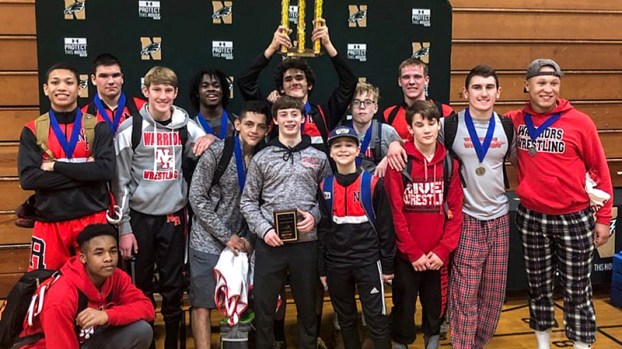 The Warriors went down to Elizabeth City, N.C., to compete in the weekend tournament. The Warriors wrestling talent was on display — not only did the team place first, it placed 98 points ahead of the second-place team.

A couple of days before the tournament, the Warriors had senior night, where Whear, Mattox and Gray were honored. They have postseason success and knows what it will take to win once regionals and the state tournament approaches.

“I’m hoping those three seniors are what can carry us through the postseason,” Coach Tripp Seed said. “All those guys are wrestling well for us at the moment, and we just hope they can do some good things for us in the postseason coming up here.”

Seed feels that with a couple of things left to fix, the Warriors are right on track for where they want to be, come postseason time in February.

“I feel like we are wrestling well right now,” he said. “There are still a couple of things we have to fix, but we are in a good position. We have some adjustments we want to make to the lineup and get in better shape. We don’t want to overwork ourselves though. Overall, I feel good about where we are at.”

Hurricanes kick off the new year with soccer

The Paul D. Camp Community College Athletics Department celebrated 2019 with the news of the addition of a men’s and... read more