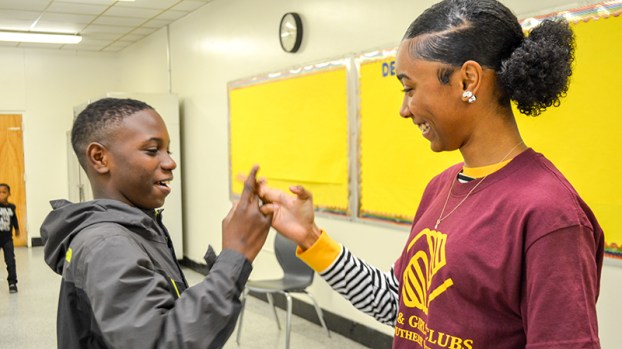 Role model to be honored

The Suffolk Unit of the Boys and Girls Clubs has named Brielle Little, 15, as its Youth of the Year.

The King’s Fork High School sophomore said she was excited for the honor, but also slightly nervous for what comes next.

That will be a speech for the 10th annual Youth of the Year Dinner on March 14 at Hilton Norfolk The Main, alongside other honorees from the Southeastern Virginia region.

“It’s kind of exciting, but at the same time, it’s nerve-wracking,” Brielle said.

Keith Robinson, director of the Suffolk unit, isn’t worried about her in the slightest. He said she doesn’t shy away from the spotlight, and this is no exception.

“She may have some wrecked nerves right now, but once the spotlight hits her, you won’t be able to tell,” Robinson said.

Brielle volunteers after school at John F. Kennedy Middle School, where the Suffolk Unit of the Boys and Girls Club is based. She helps serve food from the kitchen and chats with the younger kids in the cafeteria.

Children spotted her in the cafeteria on Monday to give her high-fives and hugs. She’s there to be a role model for the younger kids, and it shows. Robinson has noticed that about her since he joined the Suffolk Unit four years ago.

“From the jump, I always noticed that Brielle was able to stand out from the rest of her friends, because she was willing to take that leap and be different,” Robinson said.

Brielle first joined the Suffolk Unit about six to seven years ago, after her family moved to the area from Norfolk, she said.

A lot has changed since her time in elementary school. She said more children are glued to their cell phones and other electronic devices these days, and sometimes it’s hard to get their eyes off the screens and get them involved in group activities.

But Robinson has seen Brielle step up, interact with her younger peers and lead by example over the years, back to when she was encouraging her friends to be respectful and stay in line.

She’s also part of the King’s Fork High School JROTC program. After she graduates from high school she plans to go to college and then join the U.S. Air Force, following in the footsteps of her brother Camryn Little, 22, and her parents Tanya and Timothy Little. Her brother is in the Navy, and both of her parents were also in the military.

When she delivers her speech this March, she’ll talk about how the Boys and Girls Club helped her transform from a shy little girl to an outstanding leader.

“The staff members have helped me become my own person, and be a leader instead of a follower,” she said.

The deadline for Youth of the Year Dinner sponsorships is March 1. Visit bgcseva.org/youth-year-2018 for tickets and other information.

Four business plans were awarded grant funding on Tuesday to expand or get started in downtown Suffolk. Brick and Mortar... read more