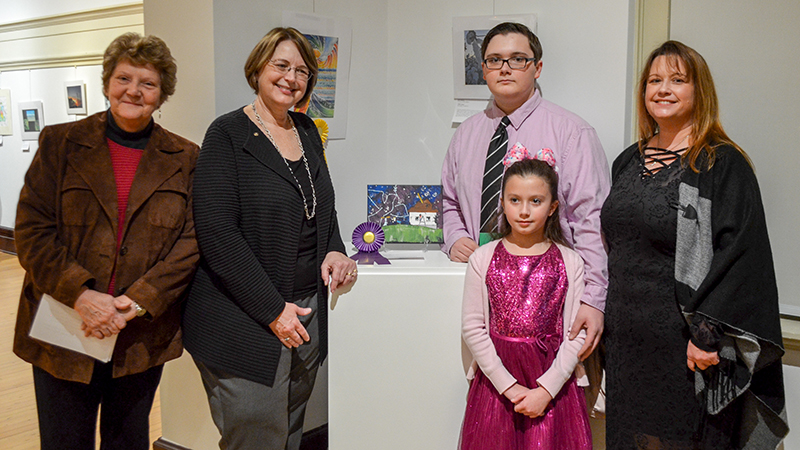 The ceremony was held in the Suffolk Center for Cultural Arts on Thursday evening, where more than 70 parents, students, school faculty and local officials attended the opening of the Sister Cities International Exhibit in the BB&T and Norfolk Galleries. The exhibit is free and open to the public from 11 a.m. to 4 p.m. Tuesday through Saturday through Jan. 30.

Each year, students submit their original artwork and literature that expresses the mission of Sister Cities International. This year, students submitted work based on the theme “Global Citizens: Resilient Communities,” in which each submission highlighted resiliency, citizen diplomacy and creating peace through people-to-people interaction.

“I always say (that) whoever puts things on these walls (is) already a winner,” Johnson said as she read off the winning submissions Thursday night. “Truly being part of something (is what) matters the most.”

The top three for the drawing category were NRHS’s Journey Dozier in third place, NSA’s Emmi Goodman in second place and NRHS’s Aniston Waldo in first place with “We Can Make a Difference.”

The top three for the painting category were LHS’s Tatiana Neild in third place, NRHS’s Madison Seely in second and NRHS’s Peymon Aleagha in first.

The top three for the 2-D mixed media category were all NSA students: Sarah Christiansen in third place, Brett Johnson in second place and Katherine Goldbach Ehmer in first place with “Contrasting Parallels.”

The winners for the “photography/computer generated art” category were all NSA students: Jaliah Hippolyte in third place, Sarah Johnson in second and Emily Forrest in first with “Blooming Flower.”

Mason and others in NRHS art teacher Brian Kershasky’s class spent weeks working on their projects both at home and in the classroom. It was just Mason’s first year at NRHS but he came in with plenty of “energy,” Kershasky said.

“He took that energy and rolled right into it,” he said about Mason.

The top three in each category — as well as honorable mentions — also received ribbons to place on their artwork in the gallery. First-place winners and the Sister Cities Choice Award winner won $50, while Mason won $100 for Best in Show.

Mason’s art will also be entered in the Sister Cities International Competition this year, along with Simon’s poetry and Drew’s essay.

Sister Cities International was created by President Dwight D. Eisenhower in 1956 to promote respect, understanding and cooperation worldwide. The nonprofit network currently unites tens of thousands of citizen diplomats and volunteers in nearly 570 member communities, with more than 2,300 partnerships in 150 countries in six continents.

SSCI sponsors students to participate in an annual summer exchange program with host families and volunteers in Oderzo, and also to attend the annual Sister Cities Youth Leadership Summit.